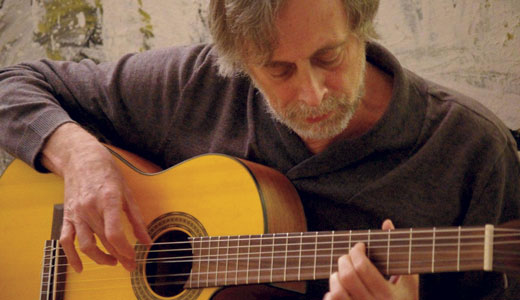 Can you walk in my skin?
How simple a simple meaning
Can be when what you think
You are is trapped in the solitary
Confinement of the ribcage?
(“Into the Open,” from Misha Feigin’s “Skippers in Training”)

Trapping Misha Feigin in the confinement of a ribcage — or any structure, for that matter — is pretty much unimaginable. A Russian ex-pat, he immigrated to the United States in 1990 and over the last couple of decades has emerged as one of the more protean figures in Louisville’s cultural scene. He’s a raconteur (with a sometimes mordant sense of humor), a writer and, perhaps most visibly, a musician. Louisville audiences might catch him one night singing a sentimental Russian folk song at a Louisville club, and the next might hear him using the same guitar (or perhaps a balalaika) to traverse the dissonant limits of free improvisation (an idiom where he’s earned something of an international reputation).

Though best known for his music, Feigin has also earned a steady and growing reputation as a writer (his poem “The Singing” earned the 2000 Thomas Merton Prize for Poetry). In 2004, he published “Searching For Irina,” a charming (and chilling) memoir of his years in the former Soviet Union. In 2007, he followed up with a well-reviewed volume of poetry, “The Last Word in Astronomy.” Now Feigin has returned with a fine volume of new poems, “Skippers in Training” (Avid Readers Publishing Group, $11.95).

Feigin’s poems are brief but never slight. They read like verbal watercolors — telling details skim across the transparent surfaces. He favors light, nimble lines and graceful rhythms that sound natural on the tongue but are craftily wedded to the rhetoric of his ideas, as in these lines from “Concerning Some Subtle Popping Sounds in the Pond”: Water is only a reflection/Of the flow that carries/No marks — you walk or/Write on it, but the word of/You has always been there …

The best poems in the collection focus Zen-like on the borders between perception and reality, experience and meaning. Feigin’s influences and inspirations show up in epigraphs and allusions to people like Ludwig Wittgenstein, Franz Kafka, William Burroughs and Muhammad Ali (You must condense your will/A pneumatic fist of your heart/Will punch the way out/Of the paralyzing apathy of dread …).

And frequently Feigin captures a reader’s attention by posing a question — then leaping to an answer not through conventional logic, but through a series of cunningly reasoned images that culminate in an epiphanous cadence. In one poem, he looks out a window into a gray, frozen winter. I am trying to understand/The lace of naked tree branches/With an electric cable crossing it, he writes. Then continues, Raindrops run down the glass/Pretending to be transparent/A good place to stop the urge/To explain every thing separately/I write on the glass with my finger:/“Mystery is a winged creature”/And watch the letters fading away.