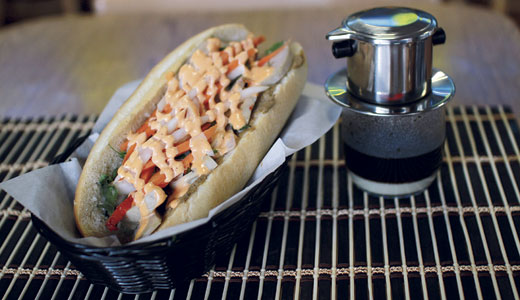 It’s no longer hip to claim colonialism was cool. Take it from one who spends entirely too much time in the groves of academia: In this post-colonial era, the dead white men who once strode the earth to plant a flag in distant lands in the name of president or queen are distinctly out of fashion. It isn’t even politically correct to brag about those exploits anymore.

But I’ll step up and proudly claim one great boon of civilization that may be even better as a result of having been taken around the world to meet and mingle and gain new ideas from exposure to other cultures.

Of course I’m talking about the sandwich. The portable lunch may have well served the Earl of Sandwich when he was peckish at the card table. But I’ll submit that what was a mere convenience for the eponymous Earl might have been a lifesaver for a sea captain locked in battle.

From the taco to the southwest Asian shawarma or even the Chinese steamed bun, almost every nation has made the sandwich its own. But it would be hard to find a better portable lunch-on-bread than the Cuban sandwich or the Vietnamese banh mi.

These two sandwich classics are surprisingly similar. The Cuban, a 20th century invention, owes its style to Cuba’s Spanish heritage, with a decided New World accent. Stack both ham and roast pork and crisp pickle rounds on a fluffy white Cuban bread smeared with butter or olive oil and yellow mustard, then press and toast in a panini-style grill. For a good one in Louisville, consult the folks at any of Valu Market’s delis — particularly Valu’s ethnic temple in the South End — or Havana Rumba and the city’s other Cuban eateries.

“Banh mi,” pronounced “bon me,” more or less, is Vietnamese for “bread,” specifically the baguette that arrived with the French colonizers and remained after Ho Chi Minh & Co. ran the Frenchies off (and the Americans, too, but let’s not talk about that today). The banh mi has become so internationally trendy that it even boasts its own Facebook page (facebook.com/BanhMiSandwich).

Banh mi comes with a bewildering variety of fillings, a good selection of which are available at Banh Mi Hero, a lovable new spot in the Highlands. For simple authenticity, though, it’s hard to beat the Saigon Hero ($8), the specialty of the house.

According to the restaurant’s menu, this classic model starts with slices of Vietnamese pork sausage, which are steamed in a banana leaf. It’s coupled with sliced braised pork belly, homemade pâté spread, house aioli, a dash of molasses-infused soy sauce, fresh cilantro and cucumbers, and topped with crisp white onions, pickled carrots and daikon.

All together now: Can we say “Yum”?

Banh Mi Hero opened just this month in the tiny, bright robin’s-egg blue room vacated when Oishii Sushi moved out to Taylorsville Road, but it packs plenty of experience thanks to hospitable host Lee Tran, the son of Annie Tran of Annie Café, one of the most popular of the South End flotilla of Vietnamese eateries (and another place to get a fine banh mi).

Tran’s banh mi menu features eight variations on the basic sandwich, all competitively priced at $7 or $8, variously stuffed with beef, pork, chicken, tofu, eggs and more. It’s all made with fresh breads, local produce and house-made condiments and spreads.

The aforementioned Saigon Hero is a classic of the genre, flawed if at all only by a fresh but rather bland baguette but elevated by a house-made aioli with a kick from a dollop of Southeast Asian hot sauce. LouisvilleHotBytes.com scouts tell me that Tran is talking about sourcing a better baguette, a move that may have already been made by the time this sees print.

The Hanoi Hero ($8) adds more French character, dressed with lettuce and tomatoes and adding slices of Vietnamese pork sausage to the pâté, aioli and pickled veggies. Lee’s Sandwich ($8) is the big boy, adding scrambled eggs and cilantro to the mix; the Good Morning Vietnam ($7) piled three fried eggs and cilantro on a layer of pâté. Bánh Mì Chay ($7) goes animal-free with grilled onions, mushrooms and thin-sliced grilled tofu in a yellow curry and chili sauce. You’ll never miss the meat.

You can also chow down on Vietnamese soft tacos (all $6, with dressed banh mi ingredients served atop small tortillas in a wacky Vietnamese-Mexican fusion), and rice cups ($4, jasmine rice served in small bowls topped with banh mi goodies). Both options come with your choice of grilled marinated steak, sweet lemongrass pork, curried lemongrass chicken, or curried chili tofu and mushrooms.

We shared a banh mi bigger than your head, a rice bowl and a pair of tacos, and it was all so good that my plan to take half the banh mi home was foiled when I couldn’t stop before eating it all.