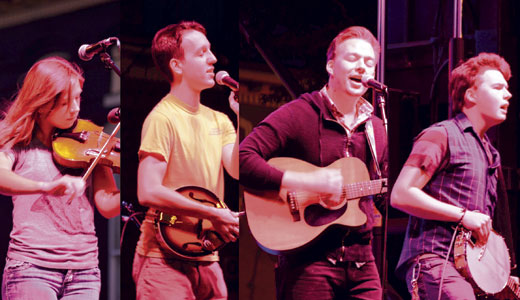 Jordan Trabue’s folk-rock quartet, Beady, was approached by sonaBLAST Records boss Gill Holland about a year and a half ago. The band has been playing together for three years, and half of the band (Jesse Weber-Owens, 17, who plays cello, banjo and percussion, and violinist Sarah Trabue, 16) is still in high school.

Jordan Trabue, 21, plays guitar, mandolin and banjo, and graduated from Middle Tennessee State this year. Dylan Weber-Owens, also 21 and also a guitarist and banjo player, is at U of L. The pair of siblings seems to have simple goals: “We play a bunch of different instruments, sing some harmonies, and generally try to have a good time,” says Jordan. But there might be more ambition under that laid-back approach.

“sonaBLAST has been great to work with,” he says. “They financed our first professionally recorded album, as well as our first music video.”

The album, the aptly named Youngest Days, was released earlier this week. The first video was for their song “When I’m Twenty.” Though half of the band has already passed that point, “We kept the song, though, because it’s fun and catchy.”

With a nod to the Beatles, Trabue is asked where he might be when he’s 64. He replies, “I hope that by the time I’m 64, we’ve made more songs so I’m not still singing about being 20. It might weird some people out.”

Another song, “You Belong in Louisville,” sounds like another contender for an anthem. Trabue acknowledges that it’s been suggested that he pitch the song to the tourist board, but he downplays the possibility.

“I’m not sure if it would work to attract tourists. I think it’s certainly a good song, if I’m allowed to say that about my own songs, but it’s sort of this sweet, low, mumble of a love song rather than something bright and catchy that tourist boards might go for.”

Beady performs live on WFPK’s “Live Lunch” on Friday and at the Douglass Loop Heine Brothers on Saturday at 3 p.m.