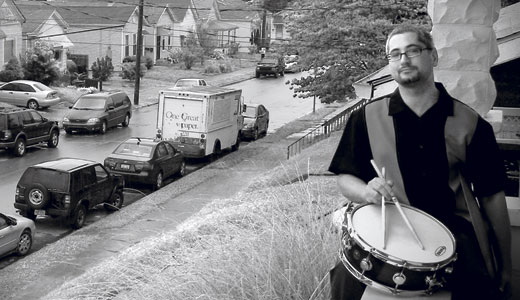 How to get to Samuel Street

Drummer/bandleader/composer Bobby Falk celebrates the release of his second album, Samuel Street Songs, with a free record release show (including CDs for sale) Sunday at 7 p.m. at the Louisville Musicians Union Hall (1436 Bardstown Road). He comes by music naturally, as the son of a saxophonist and recording engineer, Gary, and longtime music teacher Dorissa. It’s been six years since his first, Turning the Tables, and Falk feels he’s come a long way since then.

Asked why he decided to record the new album, Falk says it was a combination of having several fresh new tunes, and being asked by band members, patrons and family, “When are you going to record?”

For the recording, he chose seven musicians who most frequently work with him, including keyboardist Wade Honey and bassist Lee Puckett, good friends who also teach with him at the Kentucky School for the Blind.

The new collection features eight originals (including both new studio and live versions of the song “Turning the Tables” and a new interpretation of his “Ballad for Serenity”), plus Falk’s arrangements of songs by Steely Dan, Pat Metheny and Dave Matthews. About the two older pieces, he says, “They needed to be re-recorded. You do songs on the gig for years, and they change.”

Falk is happy with the sound of the disc, conveying a warm ensemble feel so that each instrument can be clearly heard. It was recorded at his father’s studio, and Falk stayed involved with the post-production work as well. From the time he decided to record, he set a goal to wrap it within a year and is pleased with having met that self-imposed challenge.

Falk is psyched for the release party, saying it will be special because “live jazz is one of the best experiences you can have — it’s organized yet spontaneous.” He’s held down steady weekend gigs at Eddie Merlot’s for three years. Playing in this setting rather than at the restaurant, “We’ll be without the leash. We can (really) play, without the restraint.”