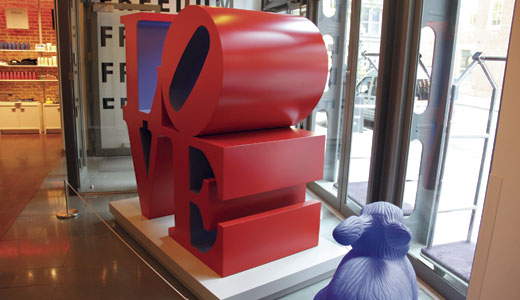 There are things we take for granted this time of year. Another tinsel-covered tree, train sets, lights and “LOVE.” And when I mention “LOVE,” I’m not talking about amour or ardor, but the Robert Indiana sculpture currently on view at 21c Museum Hotel.

Some works of art are so assimilated into our culture that we can pass them without remembering to take a second look. And let’s face it — the design of “LOVE” is everywhere. We’ve seen it on shirts, rings and lampshades. But, how often do you have an opportunity to see a work by Robert Indiana, the artist who originally painted the word — L and O stacked above the V and E — as a commission for the Museum of Modern Art in New York? Plus, if you need another seasonal tie-in, the assignment that launched this icon was to create art for a MOMA Christmas card. When Indiana accepted the task, he delved into a place many of us mine for inspiration — childhood.

Born as Robert Clark, Robert Indiana changed his surname to match his home state when he moved to New York City in 1954. A poet, painter and designer, Indiana played a seminal role in the pop art movement along with Jim Dine, Claes Oldenburg, Andy Warhol and others. Indiana spent the late ’50s and early ’60s experimenting with bold type and shapes often associated with advertising. In his poetry, Indiana first stacked the letters L-O-V-E, but the earliest paintings of this loaded word were the result of the MOMA commission.

In designing the work, Indiana says he created it as a tribute to his father and his Indiana childhood. Riding along, as his mother drove his father to his job at a gas station, Indiana took in the red and green of the gas pumps, uniforms and oilcans of Phillips 66, “against the blue Hoosier sky.” The visual landscape made a lasting impression on Indiana; he utilized the block type of signage and the colors of this memory to create the work. Indiana says, “My ‘LOVE’ is an homage to my father.”

After the MOMA Christmas card was released, Indiana lost control of the image as it appeared on cufflinks, consumer goods, posters and so much more. Often cited as America’s most plagiarized work of art, “LOVE” is unique in its familiarity. Many recognize the image without knowing who Robert Indiana is.

Of course, Indiana is also in the business of multiples. You can see Indiana’s works in many major cities, and Alice Gray Stites, chief curator at 21c, says she saw other Robert Indiana multiples at the Frieze Art Fair in London around the time the piece at the museum was installed. Stites sees that connection — having Indiana’s pieces on view in large cities, at a prestigious international contemporary art show, and in downtown Louisville — as another example of Louisville growing as an artistic destination. She says she strives to share “contemporary art with the public and revitalize downtown through galleries, museums and artists, making culture part of everyone’s experience.” And this is the reason Stites has the sculpture placed at the glass wall of the foyer — so everyone can see “LOVE,” those within the hotel and individuals passing by.

Owned by Jonathan and Tracy Blue, the “LOVE” sculpture was loaned to the Speed Art Museum before it closed for expansion. The work is similar to the size of an adult couple, providing an unusual combination of feeling large, yet being small enough for viewers to peer into the letters, an ideal vantage point to take in the smooth red and blue hues. We are lucky to have the artwork available to us, but just like the lights and wreaths around town, “LOVE” won’t be at 21c forever. The loan expires this spring.

Since 21c is open 24 hours a day, you can stop by anytime and take a look at Indiana’s work. It’s an opportunity to talk about multiples in art, and how that can influence the value of a commodity — a topic further fueled by “David (inspired by Michelangelo),” the large, gleaming gold replica on Main Street. Or, if you are more literary, it’s a chance to see a visual work clearly connected to concrete poetry, also known as pattern poetry, where words or letters are arranged to add meaning to symbols. And finally, it is the season to observe “LOVE.”