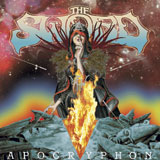 Listening to The Sword’s fourth album, Apocryphon, is like stepping back in time, but to which era, I am not quite sure. At first, the classic guitar riffs and vocals with a heavy rate of vibrato channel the ’70s sounds of Asia and Blue Oyster Cult, but as the mythical and philosophical element of the lyrics and comic book-influenced artwork come in, they bring to mind a Rush or Pink Floyd influence. After all, “apocrypha” itself means “of questionable authenticity,” and what questions society more than science fiction? With an interesting scratched and grainy element to his soaring vocals, singer J.D. Cronise also corrals a Southern sludge sound to the band’s music, reminiscent of Torche vocalist Stephen Brooks, that probably comes from The Sword’s Austin roots.