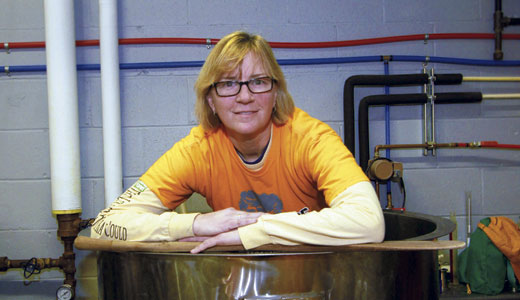 Most of us sit chained to our desks from 8-5 dreaming of a better job, a thinner body and a fatter wallet. Very few of us are actually able to break those chains to pursue what it is we really want to do. Leah Dienes loved to brew beer and knew she was good at it. She won competition after competition during her 15 years as a home brewer and was tired of shilling out her swill for free to thirsty friends. So last Derby, she opened her own bar/brewhouse, Apocalypse Brew Works, with some fellow home brewers. The dozen or so taps have been flowing ever since.

Eight months into the business, Dienes is pleased with her decision to tap into her passion. “It’s a lot of work, but when you’re passionate about something, it drives you to keep going and improving,” she says. “I’ve learned a lot and am still learning about this business, but as we’re going along, we’ve gotten such support from our fans and fellow brewers that it’s very motivating. We’ve barely scratched the surface of the types of beer we want to create, so we’re looking forward to how our brewery evolves.”

The taproom, also known as the Fallout Shelter, is a small space with a handful of stools scattered about. Most of the action takes place in the parking lot in front of the brewery, where on any given Friday or Saturday night, you’ll find patrons huddled around picnic tables and a few food trucks. And Apocalypse often partners with animal organizations, encouraging its clientele to bring their dogs, like at this fall’s Yappy Hour.

“It’s not just about the beer, it’s about how beer brings folks together and the different bridges that are built with the diversity of the cool organizations in our city,” Dienes says. “We love that the food trucks support our brewery. We’ve met great folks with the Humane Society and the Shamrock Foundation and love that we can use our brewery as a meeting place for them to enjoy getting together with their furry best friends.”

Apocalypse has about 12 styles of beer on tap at a time, and the selection varies from week to week. This summer the hit beers were Watermelon Crack and a lager made with green peppers. Currently the roster includes Butchertown Brown, Fallout Dust (made with peppercorn), Tu-pocalypse Stout and Hoptrocution (an imperial IPA).

Dienes and company are gearing up for the alleged apocalypse, whether it’s predicted by the Mayans or the undead. “Which one?” she asks. “I’ve got my zombie plan in place, and my thoughts on the meteor hitting the earth. If it’s an atomic bomb, the plan is to hunker down in one of our coolers and see how long we can live on barley wine.”

But in all seriousness, they are planning an end-of-the-world party like no other. Titled “Drink Beer ’Til the End,” the event takes place on Dec. 21 starting at 4 p.m. and will include food trucks, a heated tent, apocalyptic movies and live music by the Uncommon Houseflies and Alanna Fugate. And on Dec. 22, if we’re still living and breathing, they’re having a “You Survived Food Drive” where you can donate all that food you hoarded.

But back to the end. If indeed we cease to exist after Dec. 21, the last thing Dienes would want to enjoy would “probably be one of our IPAs, and if I make it out of our Fallout Shelter, a Manhattan — gotta have some bourbon if it’s the end!”