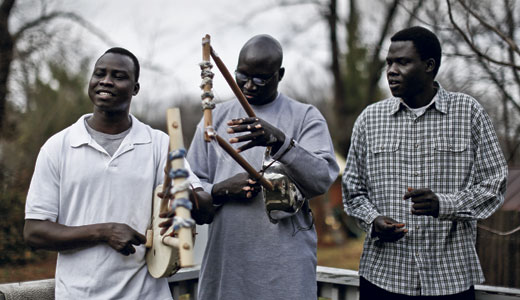 But tucked into a corner lies a musical amalgamation unfamiliar to most households. Constructed from a silver salad bowl, fishing string, strips of cloth, and wood, this is the rebaba, a South Sudanese musical instrument similar to the banjo. Pac, Bior and Malou, all in their 30s, make up part of The Sudanese Rebaba Project, a group of musicians founded by refugees often called the “Lost Boys” of Sudan.

Bior and Pac pick up the instruments. Bior begins strumming. A hollow, brittle sound pops, the antithesis to a harp’s elegance. Malou begins to sing. Pac gently taps on his rebaba, creating a beat. Suddenly, an enchanting melody fuses. The words are foreign, but a sorrowful patience throbs within the music. Malou explains that the song is about a rebel soldier who hasn’t seen his love for seven years. He quotes a line in English:

No matter how long, will you wait for me?

“It takes you back to that situation, and you remember what you went through,” Malou says.

In 2010, LEO Weekly wrote about Malou’s escape from his home country as a young boy in the late 1980s. Torn by civil war between the Islamic government and Christian rebels, violence in Malou’s village had escalated. Like 20,000 other young boys, Malou fled. His family was later killed in an intra-tribal attack, the Bor Massacre.

Bior and Pac also left families due to random, brutal attacks on their villages. All three headed for Ethiopian refugee camps.

“There were no cars, no bikes, some people were barefoot, no shoes,” remembers Pac. “So it was kind of dangerous. And there were wild animals out there. And there were a lot of enemies outside where we were walking.”

Enemy soldiers were a constant threat in the trek that spanned hundreds of miles. Once in the Ethiopian camp, malaria, cholera and starvation killed many.

“You’d see people getting carried out to the cemetery every day,” Pac says.

But it was here, amidst desolate conditions, that the boys welcomed the joy of music. In the evenings, out came rebabas. Spontaneous dancing and singing lifted spirits.

“We were having no fun in camps,” Bior says. “So we had to do something.”

Eventually, turmoil in Ethiopia forced the Lost Boys to return to Sudan in 1991. Confronted by government militia, Malou was shot in the arm.

“It was July, and we have a very tall grass in Sudan, tall as a man. I thought if you go inside, maybe nobody could see you,” he told LEO in 2010, recounting his attempts to hide from danger.

Malou, Bior and Pac all wound up in a Kenyan refugee camp for about a decade before finally coming to Louisville as refugees.

The Sudanese Rebaba Project recently played a lunchtime concert in Metro Hall, but all three men keep busy with work and school. A few members live out of town, making performances difficult.

“You have to go to work and take care of families,” Malou says.

Still, the group hopes to record a CD soon. For now, since Bior and Pac live in apartments, Malou’s living room hosts impromptu concerts. They play for fun, each note a link to their country separated by two decades and many difficult miles.