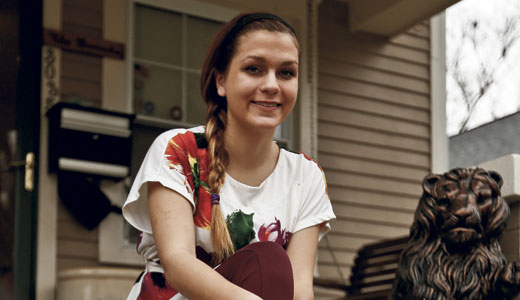 Wearing skinny black jeans and a T-shirt, 17-year-old Savannah Dietrich tucks her feet beneath her as she folds into her dad’s Lazy Boy chair. “Law and Order” — her favorite show — plays on TV. She’s watched pretty much every episode and knows the characters, their dialogue by heart.

“Olivia Benson always says, you know, she sees plenty of victims who regret not reporting crimes but none that regret reporting it,” Dietrich says, referring to a detective on “Law and Order: SVU.”

If only life could be that simple: real-life victim culls wisdom from fictional drama earning swift, tidy justice.

But Dietrich’s year-and-a-half in the spotlight battling the juvenile justice system has not been easy to endure.

In the fall of 2011, she discovered that a few months earlier, after a night of drinking, two boys sexually assaulted her. They’d gone so far as to photograph their act as well as her semi-nude body, texting it along for others to see.

At first, Dietrich bottled up what she knew, withdrawing from family, crying at the tiniest of nuisances. Finally, in December 2011, she alerted police. A few months later, the story erupted.

Unbeknownst to Dietrich and her family, the two boys received a plea deal. Believing the sentence was too light, Dietrich defiantly tweeted the names of the boys. In turn, the defendants’ lawyers filed a motion to hold her — the victim — in contempt. Media from around the globe hungered for the story. Suddenly, the petite girl with light green eyes, often framed in dark eyeliner, became an international victim’s advocate.

Eventually, the juvenile case records were opened. Dietrich wanted to prove her story true, despite attempts by one defense lawyer to paint her as someone who’d made false claims. The defendants ultimately received a tougher sentence. Their felony crime of sexual assault cannot be reduced to a misdemeanor for three years, assuming they behave. Also, they must attend a sex offender treatment program. Both stipulations were absent under the original deal.

“Sometimes I’d look at my phone and think I need someone to talk to,” she says. “Who do I have to talk to?”

Sure, there were counselors, attorneys, parents. But like most teenage girls, Dietrich desired the large social circle she once had. Many friends retreated during this ordeal. She values the true, close ones who stuck around.

In talking about her case, Dietrich occasionally tugs on her long straight hair she recently dyed, darkening the roots and lightening the tips. Next month she turns 18. She plans to study criminology or psychology in college. For now, she plans on obtaining her GED and enrolling in community college.

Dietrich’s healing process isn’t over. Some nights, thoughts of the boys, the tweets, and the judgments needle her. But she’s confident the scars will make her a stronger woman.

“I never saw myself as someone who’d stand up for herself. I’d rather spare their feelings than mine. I’d really like other people to know you really do need to put yourself before others, especially in situations like these,” she says. “You can’t sit there and be considerate of people who hurt you.”