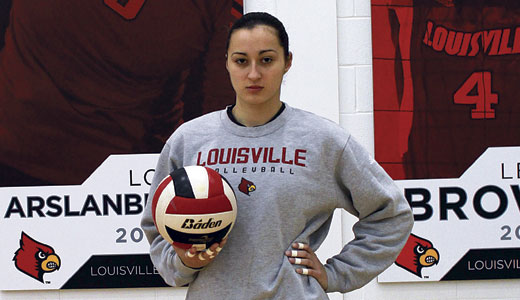 If your résumé boasts that you’re ranked No. 3 in the nation in kills, you’re either a crazy serial killer or a damn fine volleyball player. Lola Arslanbekova is the latter, thankfully, and she led the University of Louisville volleyball team in one of its most successful seasons to date. The Cardinals finished the year with a record of 30-4 after losing the NCAA Tournament to the University of Michigan in the second round match. The four matches Lola played on Nov. 30 against Michigan were her last for the university — she was one of four seniors on the team.

The 5-foot-11 outside hitter was recruited from her hometown of Tashkent, Uzbekistan, and has enjoyed being a part of a team, the university and the community. After each game, a dedicated fanbase of Lola groupies — whose ages range from 5-14 — gathers to shake hands with their Queen of the Kill. She considers herself blessed and stays to shake hands with each and every one.

“The fans are so incredible,” she says. “Volleyball is not the most common or popular sport, but people still know you.”

Lola, now 22, started playing volleyball at the age of 7. Though not a popular sport in Uzbekistan, she fell in with the right people who helped develop the skills she brings to the court today. Other than the language differences, Lola says it’s been enlightening adapting to the culture of the United States, and Louisville in particular. One of the biggest thrills for her is being able to attend all sorts of sporting events — from soccer to football — and seeing how involved the community is with its teams.

Lola credits the volleyball coaches, namely head coach Anne Kordes, and team effort for the successful season. Earlier this month, Lola was named to the AVCA All-Northeast Region team, making her eligible for All-American honors, which she nabbed in 2011. And if you needed more convincing of her skills, she was named Big East Player of the Year for the second straight season.

“Lola is the best outside hitter I have ever coached,” Kordes says. “She led an already historically successful volleyball program to new heights this season. I am going to not only miss coaching Lola, but she is a special young person and I will miss seeing her on a daily basis.”

After graduating from U of L, Lola plans to pursue a spot on a pro volleyball team overseas. Her killer reputation will likely proceed her. After winning the final match against U of L, Michigan head coach Mark Rosen said, “Lola is really good — she’s very good at getting around the block, and I thought we defended her well, considering how good she is. I mean, you’re not going to stop her, you just have to slow her down a little bit.”