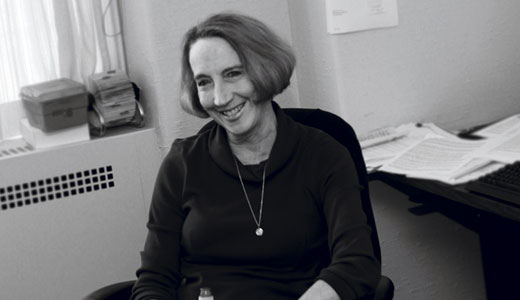 Fresh out of Northwestern University’s Medill School of Journalism, Deborah Yetter returned home to Louisville in 1978 and applied for a reporting job at The Courier-Journal.

But she didn’t get the gig.

Undeterred, the aspiring journalist reapplied, to no avail, then tried again. “They kept turning me down,” she recalls with a dry laugh.

And so Yetter headed east to Appalachia, relocating to Harlan County, Ky., where her husband, a state trooper, had been stationed.

As it turned out, moving to coal country proved to be her way in at the C-J. In addition to teaching journalism at the local community college, Yetter began freelancing for the paper’s regional desk, covering coal strikes, labor disputes and political corruption.

After three years, Yetter moved back to Louisville and landed the daily newspaper job she’d been seeking — not at the C-J initially, but at its sister publication and afternoon counterpart, The Louisville Times. “It was really a blast because we were kind of the underdogs. We would come in at 5 or 6 in the morning, and the first edition would hit the streets by 11,” she says. “It was sort of a competition, and it was always fun to beat them.”

Fast-forward 28 years, and Yetter still works at the corner of Sixth and Broadway, though much has changed. The most recent shift came earlier this year when the longtime C-J reporter transitioned into the role of editorial writer, leaving behind the bustling, fluorescent-lit newsroom for a private office with a row of windows.

“I told somebody recently, ‘I didn’t think I had so many opinions saved up over the years,’” Yetter says from behind a desk cluttered with stacks of handwritten letters, an old, yellowed Rolodex, a collection of coffee mugs, and framed photos of her three grown children. “As a reporter you see all this stuff, and it kind of makes you crazy. You think, what’s wrong with these people? Why can’t this change? Why does this have to happen? In this position you can at least express some of that.”

But she does miss the action that came with being a reporter, as well as the ability to have an impact with news stories, which, she says, “I like to think we do every once in a while.”

Over the years, Yetter has covered a wide range of topics, including transportation, federal courts, county government and the state legislature. Her most recent reporting beat entailed covering human services, a role in which she wrote a series of stories that shed light on child abuse fatalities in Kentucky, as well as the failure of child welfare authorities charged with preventing such tragedies.

“I think those stories have really driven the debate in Frankfort,” she says. “Whether things have changed or not, I don’t know. But at least people are aware of it and talking about it.”

And despite the adverse changes and ongoing challenges plaguing the print industry, Yetter can’t fathom a different career path, comparing journalism to having a front row seat on the world.

“You’re always in the middle of things, and you’re always seeing what’s going on,” she says,. “And every now and then, you get to make a difference and hopefully effect some change.”