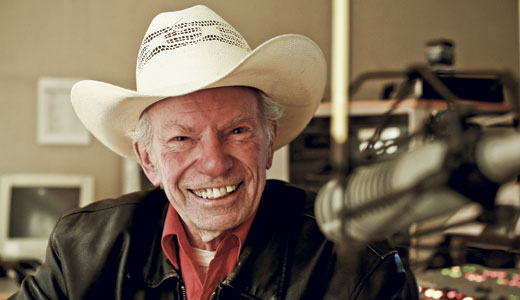 When public radio is at its best, it brings music, community and a strong point of view together in a way that can’t be faked. And while WFPK-FM has a heaping handful of local talent, none can quite be compared to Berk Bryant, the authentically genial host of “Sunday Bluegrass.”

Aged 82 years, Bryant’s both a radio and Army veteran, and a bluegrass lifer. He got his start in radio in his hometown of Lynchburg, Va., in 1954. “Then,” he says, “bluegrass was country. It was all called country” before mainstream country music evolved and became more distinct from the pure ’grass, old time and traditional country Bryant shares each week. “I like my bluegrass bluegrass. If you don’t know what to call what you’re playing, don’t call it bluegrass!”

Bryant served in Korea, worked for 12 years as a counter-intelligence special agent, and ran the closed-circuit radio station at the Walter Reed Army Medical Center. In his last decade of active service, Bryant was sent to Oahu, Hawaii (“somebody messed up,” he laughs), then Fort Knox, and in his last year, back to Korea. “I didn’t mind that, because there are a lot worse places,” says Bryant. He retired in 1982, having reached the rank of sergeant first class.

Through the years, he met a young Elvis Presley and befriended John Hartford, the riverboat man and influential singer-songwriter, and Ralph Stanley, the “Man of Constant Sorrow.” He doesn’t play any instruments himself. “When they’re talking about music and say ‘key,’ a key to me is something you start the car with,” he laughs.

He began his WFPK show — say it with me now, “the shortest, fastest and bestest three hours in radio” — in 1989, seeking to fill a void in the station’s programming. “Friends of mine in Radcliff,” where he lives now, “who knew about my love for the music asked me, ‘Why don’t you go to public radio?’” A couple years later, he showed up.

“I didn’t know anybody there, and nobody there knew me. I just asked to see the manager.” That manager was interested in Bryant’s idea but commented that the station didn’t really have much bluegrass. Bryant told him he had plenty at home. The manager asked, “Do you think you have enough to sustain a one-hour show?”

“‘Yeah, I think so’ … 23 years later …” laughs the man who gave himself the nickname “The Country Gentleman.” Two years later, the show had expanded to its present three-hour length, heard Sunday nights from 8-11 p.m. On New Year’s Day, he’ll also continue his two-decade-long tradition of playing nothing but Hank Williams music between noon and 3 p.m. on WFPK.

He drives in from Radcliff each week to share the best of today and yesterday from his collection of more than 1,000 CDs, some 45s and “close to 20 linear feet of LPs.” A large part of his happy longevity on the air can be explained by one simple fact: “No one tells me what to play.”