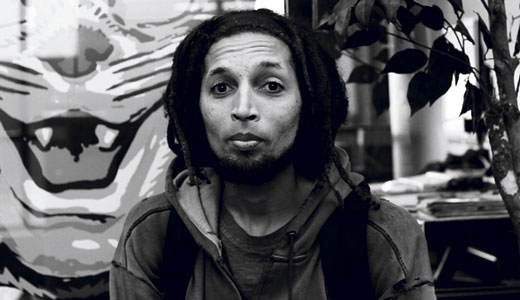 Arsenio Zignoto is not the name given him by those who brought him into the world, but neither is Zignoto merely the sum of his chromosomes. You may not know him by any name, but his is a face easily recognized. As long and lean as his dreadlocks (or his affinity for giraffes), the multi-instrumentalist is spotted like Waldo throughout the Highlands carrying any number of music- or noise-making apparatus.

He once played a plastic bag at a show — “There were lots of drums and it sounded like … an evening gown amongst the chaos” — and has shared his sounds with bands like Sapat, Softcheque, his own Raw Thug moniker, and most recently Mindhorn, amongst countless other sit-ins and randomness.

Speaking of random, a Zignoto-post on social media is exactly that, but what it may lack in easily traceable origin or coherency it makes up for in surreal logic. It’s the “Star Trek” foundation of science fiction: We buy warp-drive, transporters and the coincidental abundance of bipedal extraterrestrial life, but we require reason and reality at nearly every other point. That’s the mind of Zignoto. Long-ranging chats and conversation could never be accurately translated or condensed for others.

Long ago, the lesson was learned that wits both dry and absurd never survive in the retelling, and the same can be said for relaying the quirky details of this unique music man.

So we learn that he-who-is-not Arsenio first came by his first name by misleading a seventh-grade schoolmate (who somehow always missed roll call and the truth of what his mama named him), and his last by a remix of a job-created nickname referencing his dreadlocks to the son of Marley.

Asked to estimate, end to end, the hours of his recorded musical output, he will only speak in cassette-form, saying, “Things don’t count until they’re on magnetic tape” (700 tapes, if we’re counting, many of which he’s been uploading to his “Slobberkiss Intl” Bandcamp page, which may render the tapes nonexistent, if we’re holding to McFlyian logic).

Nearing the finish line on his teaching degree, Zignoto ponders life outside the performance realm, focusing on composition and getting the right people in the room. “I am more an initiator than an executor. When musicians get together, sometimes they don’t know where to begin; I always know where to begin.”