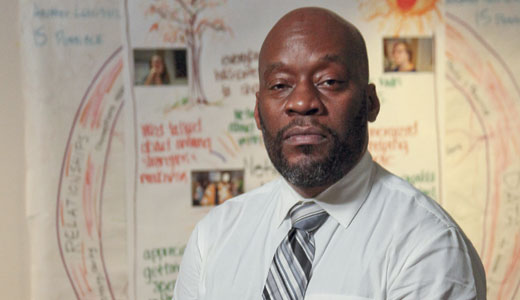 To say that Anthony Smith is a busy man with big goals would be a grand understatement.

As the organizing director for Louisville’s Network Center for Community Change (NC3), Smith tackles a wide range of challenges, from vacant and abandoned properties plaguing neighborhoods to at-risk youth lacking the necessary resources to escape a cycle of poverty.

But for Smith, his job is not about sweeping in to solve these problems himself, but giving people the resources, connections and confidence to take control of their own circumstances and change them for the better.

“Most of this is around self-resilience,” Smith says. “How do they advocate for themselves, how do they understand their weight and position when they walk into a room, and how do they use all of that for positive change?”

Smith’s current large project is community-engagement mapping in the Smoketown neighborhood, as NC3 staff and members spent months going door-to-door in order to identify not just vacant and abandoned property, but the neighborhood’s positive assets. NC3 recently shared their findings at a community meeting in Smoketown, receiving feedback for what can and should be done with space that has untapped potential.

“It’s a great process to have a lot of people engaged and have a conversation around it,” Smith says. “We hope that people can have some say-so in what their neighborhoods look like, instead of having someone else say, ‘This is our plan for your neighborhood. Hope you like it.’”

Born and raised in Louisville, Smith takes pride in his youth work, particularly making sure that young men of color have hope for a future in which anything is possible.

In recent years, Smith has been heavily involved at The Academy at Shawnee, where he works with students to set up and achieve their post-graduation plans, whether that is college or entering the workforce. He also runs leadership development workshops focused on teaching middle and high school students to use their education to change the lives of not just themselves, but others in their communities.

“I never expected to be where I’m at today, so I can only imagine how many young people don’t expect to be anywhere either,” Smith says. “So to be able to be with them and encourage them keeps us going. That’s my passion, to help young black men have different types of futures.”

NC3 meets once a month for a potluck dinner at which members share stories of what they are doing in their own communities across the city, which Smith says never fails to inspire his own work.

“In that room, we get to watch connections be made that probably wouldn’t have been made before, and see people communicate and talk to each other in ways that are so powerful,” Smith says.

But the larger overall goal is to not just connect people in their communities, but to link them with those in power — whether in government or other organizations — so that their collective voices and desires are both heard and acted upon.

“We can bring the voices from the neighborhood into those rooms,” Smith says. “And from there … we can say, ‘This is what we’re hearing, you need to be aware of it.’ So to do that you’ve got to be all over the place.”