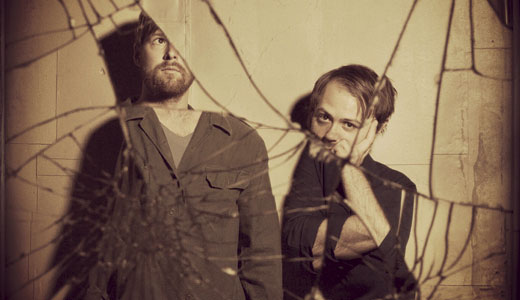 One day recently, Wax Fang’s Scott Carney glanced at a poster for the release show for his band’s most recent album, La La Land. The date was Nov. 17, 2007.

From the start, it was all too easy. Wax Fang’s first gigs in late 2005, before they even had a name, drew big crowds. The buzz spread quickly about the band led by a little-known singer/guitarist who wrote catchy but weird and glorious art-rock songs, supported by the powerhouse drummer who had toured the world with Elliott and the supple bassist who had recently left the popular Cabin.

They toured with My Morning Jacket, who mentioned them in The New York Times. Pavement invited them to play the All Tomorrow’s Parties festival in England. They signed with indie label Absolutely Kosher. And then … not much happened.

“I started to feel like my soul and essence was being pulled in all these different directions,” Carney says.

A new EP, Mirror, Mirror, was released last month, but beyond fulfilling promotional duties, the EP hasn’t been on Carney’s mind much. “My girlfriend texted me (that) morning, ‘Happy release day!’ and I didn’t know what she meant. I wrote back, ‘What’s release day?’ ‘Your EP, you idiot!’”

The songs were written in 2009 and ’10, mixing and mastering was finished several months ago, and the band is currently mastering their next record. “That project is, like, two projects behind at this point.”

Some of the frustrations he was dealing with at the time came out in the song “Dawn of the Dead of the Night of the Hunter,” which he jokingly calls “a jolly jingle — about zombies!”

The closing number, “In Memory,” was written after being present as his grandmother died, seeing her take her last breath.

Carney is ready now to begin the second phase of what will hopefully be a long life for Wax Fang. Drummer Kevin Ratterman left last year, busy running his successful recording studio, but bassist Jake Heustis remains, and the duo have been working with various drummers as they search for the next permanent member.

“We were literally playing the same set for, like, four years,” Carney notes, as the founding trio struggled to find time to work together. Carney and Heustis have enjoyed the casual nature of having musician friends sit in, and this week’s show will add former Cabin drummer Dave Chale and Jeremy Perry of the Deloreans on guitar and keyboards.

What’s next is the remainder of the “Astronaut” trilogy. The first song — a 17-minute journey into sonic space — was released in 2010. Carney was drawn to the concept by “the challenge of it. Just one simple idea, drawn out to … some giant monstrosity.”

It was also an inventive way to keep the band moving forward when they needed something to be excited about.

“At the time, when we finished part one, it was kind of a joke: ‘Yeah, maybe we’ll write a part two someday!’ The next thing you know, that’s what we were doing.”

The story will be completed with two remaining songs added on the upcoming collection that Carney calls “a 40-something-minute concept prog-rock album.”

“Part two is probably the most similar to part one. And its length and scope probably takes it to the next level … if you can imagine that,” he says, sounding giddy at the prospect.

“Part one requires a lot of patience, I think, in places, like when you have a six-minute abstract section right in the middle of your song — where, in part two, there’s more momentum, it just keeps moving.

“Part three — there’s a lot more electronic influence in it. I went in a very different direction with that one … It’s got a lot of synthesizer and drum machines, electro-drum overdub things that are very ’80s, for sure, but it’s still, like, guitar/bass/drums. But it’s poppy, for us, as of late.”

It was also a way to expand the possibilities of what Wax Fang can be, he says, folding elements of other genres into their rock trio format. “Space has no boundaries, so why should I?”