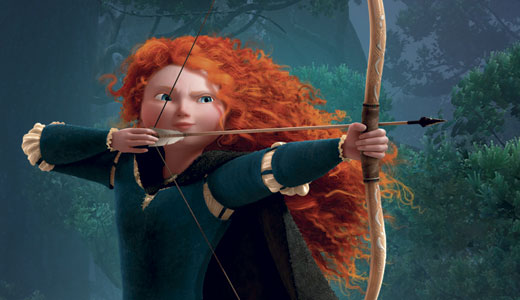 We caught this while on a rainy vacation in Ft. Myers, and it saved the whole week! An extremely lively tale of Scottish clans, the nature of society, and one very charming little princess who is determined to plot her own destiny — to hell with tradition! Steeped in animism, every rock and tree guides the feisty young woman, with will-o-the-wisps coaxing her onward … if not always correctly. But this is not the usual Disney schmaltz, there’s a bit of a rough edge and things don’t all turn out as magical as you’d expect. Oh, and about the animation: Whoever created the girl’s curly, flaming locks should get an Oscar. We love this thing!

SCOOBY-DOO WHERE ARE YOU!: COMPLETE SERIES

We’re pretty p.o.’d at Warner Bros. right now for their damn lawsuit against video vendors (read a paper, will ya?!), but we won’t let that stop you from learning about this, the entire three-season set of the original “Scooby Doo” series from 1969. And it’s packed in its own Mystery Machine! Eight discs of Scooby-liscious fun.

Director/star Julie Delpy does a sequel of sorts to her groundbreaking “2 Days in Paris” (2007) culture-shock/rom-com drama. Here she’s “in a relationship” with Chris Rock while trying to launch a gallery show with her family butting in and generally adding unnecessary drama to her life. While it never catches fire like “Paris,” there’s still a lot to like, particularly Rock, who plays things hilariously straight — even when talking to a cardboard cutout of Obama!

You might have trouble finding this at the vidstore since the title on the box says “Stephen Sondheim’s Company with the New York Philharmonic,” but under any name it is terrific. One of Sondheim’s best: the musical tale of Bobby, a 35-year-old single guy in NYC, trying to decide if he’s ready to accept love — and all the commitment that comes with it. Beyond just brilliant music, the cast features Stephen Colbert, Jon Cryer, Neil Patrick Harris, Christina Hendricks, and many more. Recommended.

LAST CALL AT THE OASIS

This is one scary doc. Americans take water for granted, but the rest of the world is in dire straits due to changing climate, ever-increasing population, waste, politics and corporations that deliberately create scarcity to boost their bottom line. And man isn’t the only one about to face a harsh reality as plants and animals are going extinct due to loss of clean water at an ever-increasing rate. You really need to see this doc. Now!

It’s hard to believe, but this is the first-ever Blu-ray release of one of the world’s greatest — and most visually stunning — movies. Peter O’Toole becomes T.E. Lawrence, true-life writer, adventurer, hero, scoundrel and Everyman, fighting for his life and his king in a land of stark, savage beauty — and for two-and-a-half magical hours, your only reality will be at his side. Also available in a 50th Anniversary four-disc Collector’s Edition; you simply must own a copy of this film!

There’s a volcano somewhere spewing out 100 Christian vid-dramas every week — all of them having the same plot. (You can thank us now for not mentioning it before.) But this one is a little different, with Jeremy Jones as the young man having a faith-based problem thanks to the actions of his dad, John Schneider. What caught our eye was that the cast included Jenna von Oÿ, who played “Six,” Mayim Bialik’s loyal gal-pal in the old “Blossom” series back in the early ’90s.

Wow, what an experience! An ancient fox spirit is freed from an icy prison, free to consume the hearts of humans. But if a human offers her their heart freely, she will become human herself. Meanwhile, a disfigured princess (stunning Wei Zhao) flees, seeking the love of her former protector, the warrior whose failure led to her disfigurement. This is classic Chinese fantasy at its very best. The live-action is breathtakingly beautiful, with the mythic creatures animated in a deliberately crude style so as to not distract from the humanity of the story. Like we said: Wow.

An absolutely kick-ass flick from Oliver Stone. Taylor Kitsch and Aaron Taylor-Johnson are solid, good-natured businessmen who just happen to sell weed. They also peacefully share a girlfriend: smokin’-hot Blake Lively! Nice. And everything was right with the world until the Mexican Baja Cartel strolled into town to take over their business — led by Salma Hayek and Benicio Del Toro! As wonderfully over the top as you’d expect from the guy who made “Natural Born Killers.” Recommended.

Simply put: The greatest sitcom in TV history. With Van Dyke at his rubber-legged best, the show presented suburbia as a place of humor, sophistication and charm. The entire cast was pure Bortsch Belt perfection, and Mary Tyler Moore … what can we say? She was our first love, and remains the standard by which all wives should be measured. Just buy it.

Ben Stiller, Vince Vaughn, Jonah Hill and Richard Ayoade star as a comic, self-appointed, potty-mouthed neighborhood watch committee that discovers that their little cul-de-sac is ground zero for an alien invasion. Lots of expensive CGI effects and the presence of Doug Jones as the head alien who doesn’t understand Earth humor and literally thinks with his penis carry this along, while the camera-mugging stars compete to see who can be more gross. Nicely over the top.

More recommended videos for our online readers only

ASYLUM (AKA I WANT TO BE A GANGSTER)

Julien Courbey is just a penny-ante hood, but he has high aspirations. Violent fate throws him the chance to join the big leagues, but his initiation includes being chained to a tree while human and other predators circle to literally tear his guts out. In French and English, filmed using a standard vidcam, this is one of the best indie crime thrillers of recent years.

Art-house reviewers have wrapped this film in fey, orgiastic prose, declaring it one for the ages. We doubt that, but it is a tale that we can identify with. Jordan Gelber plays a 30-something avid toy collector/loser who lives with parents Christopher Walken and Mia Farrow. He works for his dad and spends his nights playing backgammon with his mom until meeting a female would-be soulmate in Selma Blair, an overmedicated out-of-his-league former businesswoman who has crashed and burned. An adult dark comedy from Todd Solondz (“Happiness”).

First ever Blu-ray release of the entire decade-long Halo world saga — and progenitor of the machinima phenomenon. Gamers know that this is a damn funny spoof of that amazingly popular first–person shooter; one of the very first Internet series to achieve financial success. Here’s your chance to join the Blood Gulch crew, so load up on Red Bull and knock–knock jokes, lock your bedroom door and indulge in your favorite tank romance fantasy. 14 discs, more than 75 HOURS of silly sci-fi mayhem. AND YOU CAN WIN ONE FREE AT videotapeworm.com.

A harsh and unflinching bio-drama on the life of UK prison guard Ronnie Thomson. After returning from Iraq, he finds work in a series of maximum security prisons, drawn ever deeper into the racism, bigotry, drugs and violence of the other guards. Eventually he comes to understand that the only difference between the guards and the inmates is that the guards hold the keys. With a great cast including James D’Arcy (“Master & Commander”) and Kate Magowan (“Stardust”).

The Maldive Islands are a beautiful, tranquil place nestled in the Indian Ocean. Their rich history includes centuries of colonization, evil despots and, finally, a democratically elected president, Mohamed Nasheed, who has something new to worry about: global warming. If the seas rise, the Maldives will be the first country completely underwater. This doc introduces us to that tiny land, its imminent peril, and its leader, who must convince the rest of the world that the Earth is in trouble.

Dan Briggs plays Toby Brighter, a hip, happy gay English guy whose sister sets him up on a blind date with a sexy older dude (Rhys Howells) who turns out to be much older — like 1,500 years older! He’s a vampire, of course, and now so is Toby in this two-hour first outing of a planned eight-movie series exploring a far darker world than “Twilight” ever imagined.

Alicia “Clueless” Silverstone and Krysten “Breaking Bad” Ritter star in this sexy, lighthearted (and kinda corny) vampire chick-romcom set in modern-day NYC. After hundreds of years of partying till dawn, you’d think they were immune to love — especially since it will cost them their immortality. Think again. With Richard Lewis, Sigourney Weaver, Malcolm McDowell, Marilu Henner and more.