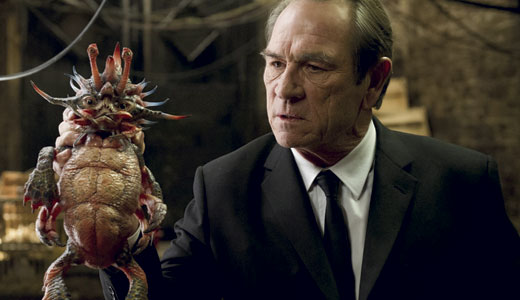 The second MIB movie, the one with Johnny Knoxville, wasn’t nearly as good as the original, but this long-delayed third outing more than makes up for it. Tommy Lee Jones — a bit long of tooth to chase aliens these days — turns the action stuff over to Josh Brolin as his younger self in a time-travel tale set in 1969 that tells of Agent K’s beginnings and a surprising new plot element that we won’t spoil here. Watch for Emma Thompson and Alice Eve as two sides of Agent O, and Louisville’s own Nicole Scherzinger as the short-lived girlfriend of giant alien bad guy, Boris The Animal. Gangs and gangs of welcome fun.

A terrific stop-motion animated flick that’s way too good for kids. Norman sees dead people, but that’s not a problem for him: They are simply a part of his world. But among the living, Norman is shy and lonely because everyone thinks he’s strange, everyone except a few close friends, that is. And he’ll need all the friends he can get when it turns out that there’s an ancient wrong keeping all these dead folk around, and it leads to an invasion of zombies — starting with our country’s founding fathers — and Norman is the only one who can put things right. Just a bit scary at times, but nothing to keep anyone from enjoying this. Incredibly entertaining.

Your usual group of knotheads — including a number of child stars (Corey Feldman, Jill Whelan from “The Love Boat”), former pro cheerleaders, and some comely up-and-coming scream queens — are terrorized by a spooky something at a (real) rural Pennsylvania Halloween attraction. Yeah, it pretty much sucks, but the cast is so attractive and everyone involved is having so much fun that you can’t help but join in. From the creator of “The Fields.”

It breaks our hearts to see former pre-teen hottie Valerie Bertinelli getting older (she turned 52 this year), but such is life. Now, of course, she’s part of this “sexy oldsters” sitcom along with Jane Leeves (“Frasier”), Wendie Malick (“Just Shoot Me”) and spunky Betty White as the old lady who can get away with saying whatever pops into her mind. Together they explore love, sex, friendship and dangly droopage within our youth-worshipping culture. It’s a good thing.

IN SEARCH OF: THE COMPLETE SERIES

Wow, man! This is just too cool! For the uninitiated: This series of pseudo-scientific vignettes from the late 1970s presented itself as open-minded, original scientific research, when in truth each episode was little more than carefully edited misquotes over a cheezy re-creation of some simple event, designed to turn it all into a paranormal mystery of Earth-shaking proportions. And with Mr. Spock himself, Leonard Nimoy, doing the voiceover, you just knew it was all real! The forerunner of today’s burgeoning info-tainment industry, and still the best; six seasons, 21 discs, more than 60 hours of clever, entertaining hogwash. Too much fun.

This may be the best movie you never saw in 2012. Shia LaBeouf, Gary Oldman and Guy Pearce join forces with the guys behind “The Proposition” (highly recommended) to create the hardest, grittiest, bloodiest look at Prohibition ever filmed. With Jessica Chastain and Mia Wasikowska as excellent eye-candy, Pierce losing all touch with reality, and Tom Hardy (Bane from “The Dark Knight Rises”) as a sweater-wrapped Terminator-like enforcer who we feared was going to rip our TV apart and come after us when he was done mopping the floor with everyone in the movie. Excellent.

We loved this original, if uneven, no-budget indie crime/slasher/creature movie. Some guys kidnap a pair of rich girls, then lose their nerve after getting to their makeshift backwoods hideout. So far, so good: nice bit of cheesecake and a spot of drama. Then it turns out that their hideout is Ground Zero for some sort of bloody sacrificial rite associated with an ancient monster. Add in some full frontal nudity, and you got yourself a movie!

A schmaltzy, overblown “bonds of family/power of music” musical drama starring Jordin Sparks of “American Idol.” Whitney Houston plays her protective mother, mainly trying to shield her from sleazy boyfriend Derek Luke. Sparks and best friends Tika Sumpter and Carmen Ejogo take on the world and won’t let anyone stand between them and their dreams. They also sing their asses off. OK, we really shouldn’t be so snarky; this is an uplifting, feel-good flick like they just don’t make anymore. Check it out.

The latest installment of this “dance can save the world” franchise finds Kathryn McCormick (2009’s “Fame”) arriving in Miami where she hooks up with Ryan Guzman, leader of “The Mob,” the dance crew that rules the local turf. Unfortunately, her dad plans to develop that turf. But all that is superfluous to the most painfully acrobatic dancing ever filmed on concrete. The best of the series to date.

This indie post-apocalypse “small band of survivors crawling through the burned out wreckage of humanity” potboiler rises above the rabble with a great cast, including Dominic Monaghan (“Lord of the Rings”) and Shawn Ashmore (“X-Men: The Last Stand”). And the dark plot seems to take up themes suggested in “The Road,” which are pretty chilling. You can’t dance to it, but worth a look.

A more complete listing and free vids at VideoTapeWorm.com.

There are only two reasons to dial up this execrable serial-killer flick. The first is director Robin Hardy, who helmed the original “The Wicker Man”, arguably the best pagan thriller ever made. The other is that Timothy Bottoms plays a character named “Danny Sullivan.” He sucks, but for those with poor memories: “Danny Sullivan” is the name of an actor from Louisville who was chosen by People magazine as one of the world’s 50 Most Beautiful People in 1990. His most-recent gig was 2000’s “Love, Honor and Obey.” OK, sue us; it’s a slow week.