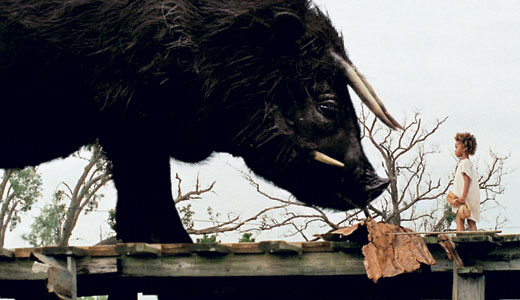 Beasts of the Southern Wild

BEASTS OF THE SOUTHERN WILD

This ranks as one of the best movies we’ve ever seen. A young girl lives all but alone in a Louisiana bayou: in danger, yet perfectly in tune with the fragile, mystical web of life around her. Everything is connected and in harmony until a massive storm shatters the dense jungle. Her home is flooded and her father is sick to the point of death; what can she possibly do to save herself, much less him and this world gone mad? Told completely from the girl’s perspective, this is a lush, enthralling and, at times, terrifying movie. We suggest you just lay back and let it sweep over you. Not to be missed.

This silly indie comedy was one of the biggest surprises of 2012. Jennifer Garner is having a ball as the wife of a long-standing butter carving champion who decides to take up the sport herself, only to find the field cluttered with a pint-sized wunderkind, her hubby’s stripper girlfriend, and his obsessed fan/stalker. How’s she gonna prevail? By hook or crook, and with help from a brain-dead old boyfriend (Hugh Jackman)! Other co-stars include Alicia Silverstone, Rob Corddry, Olivia Wilde as the stripper, Kristen Schaal, and many more. Excellent.

Here’s an interesting idea: Santa sees a family having a sucky Christmas, so he drops off an elf to help them, and in doing so, the elf learns he has Yuletide superpowers that no one expected. Now the surprising part: It is not animated. And the elf is played by Jason “Wee Man” Acuña from “Jackass”! He does an unexpectedly good job in this very family-friendly environment. Expect sequels.

A fun if kinda corny look at the perils of long-term marriage starring Meryl Streep and Tommy Lee Jones at his crotchety best. She wants to spice things up, he wants peace and quiet, so they (well … she) enrolls them in a couples retreat led by Steve Carell. A nice, knowing treat for the ’rents, to be sure.

This is a miniseries sequel of sorts to Follett’s blockbuster “Pillars of the Earth” (Starz). This Reelz Channel outing, directed by Tony and Ridley Scott, picks up two centuries later with England on the cusp of war with France, and Europe in the grips of the Black Plague. Charlotte Riley plays Caris, who strives to lead her people from the Dark Ages with help from Mirthlin (Tom Weston-Jones, “Copper”). If you liked “Pillars,” you’ll like this.

This welcome release is the perfect MST3K history lesson, containing one first-season title (“Robot Holocaust”), Joel Hodgson’s final show (“Operation Kid Brother”), one of Mike Nelson’s earliest episodes, and the introduction of Pearl Forrester and Dr. Bobo (demanded by their new owners, the SciFi Channel). But best of all, the producers took the time to create the best docs we’ve ever seen on the show’s background and changes through the years. A terrific addition to any MSTie’s video collection.

We all know 1984’s “Silent Night, Deadly Night” was one of the most outrageous and universally condemned slasher movies of all time, largely because the killer was dressed as Santa and took out his victims with a flame thrower. Nonetheless, it spawned a sequel in 1987, and now this new continuation/re-boot starring Malcolm McDowell as a sheriff who takes on the evil elf with help from his curvaceous deputy, Jaime King. A stocking full o’ fun. Also available: The two original films in a single-disc set for $14.99. What a slay-ride! (Sorry.)

We have some small issues with this final (?) installment in Christopher Nolan’s revolutionary Batman trilogy starring Christian Bale. Yeah, it’s incredibly entertaining, brilliantly conceived and breathlessly paced, but it is also the most “comic booky” of the series, with an uber-villian (Tom Hardy) who gains total control over Gotham with such ease that it didn’t ring true. Anne Hathaway’s Catwoman, however, was perfect: seductively beguiling the Caped Crusader to the point of impotence. Taken as a whole, a landmark in modern filmmaking with only a minor quibble about the ending. A must own, also available in a five-disc “Dark Knight Trilogy” for $20-$53.

THE ODD LIFE OF TIMOTHY GREEN

This Disney fantasy, aimed at adults but also great for kids, stars Jennifer Garner and Joel Edgerton as a barren couple who write down all the dreamed-of traits they’d want in a child, then bury the list in the garden. That night an unusual boy appears, covered in mud and sprouting leaves. Sound obvious? Well, it is at times, but the boy’s breathtaking approach to life and the very real problems of those around him keep the treacle down, letting the themes of individuality, the many joys in life, and the unnecessary baggage we all carry, shine through.

Ryan Reynolds narrates this lively doc on Luna, a young killer whale who gets separated from its family and begins seeking out human companionship on Vancouver Island. A terrific G-rated real-life adventure that is guaranteed to entertain anyone and everyone.

A welcome return of the horror anthology featuring a handful of indie genre masters indulging their favorite short fantasies. How you find the segments will depend on your favorite style of modern horror, but you have to love the central conceit: Petty criminals are hired to retrieve a tape from an abandoned house. They arrive to find a decaying body surrounded by TV sets and mountains of tapes. Now they must sit and watch them all to find the correct one. Pretty creepy, huh?

A more complete listing and free vids at VideoTapeWorm.com!

Terry Gilliam’s mind-bending dystopian masterwork, now available in a Blu-ray Criterion edition. Jonathan Pryce is perfect as the ordinary Joe struggling to survive in a world of insane bureaucracy that accuses, then convicts him of a terrorist bombing, simply for correcting an oversight at work. But what really makes this such a gem are the visuals: His patented “Monty Python” cartoons come to hellish life as Pryce falls deeper into the gears of an imploding society. Buy two.

CATCH ME IF YOU CAN

A lot of critics blasted this lighthearted Steven Spielberg romp through the ’60s as being shallow and insignificant. Repeat after us: “It’s a MOVIE!” If you want depth and meaning, study philosophy; we’d rather watch FBI guy Tom Hanks chase Leonardo DiCaprio as the true-life young con man who spent four years impersonating an airline pilot, a doctor and a lawyer — all before turning 21! Damn entertaining and now on Blu-ray.

One of our favorite flicks, now available on Blu-ray. Japan is besieged with genetically engineered devastation when they cross Godzilla cells with those of a plant, producing a thorny problem that only The Big G can handle. This review too short for you? Hey, we never promised you a rose garden …

Our vote for the world’s most popular live musical, a staple of high schools, dinner theaters and community productions across America. This limey version, filmed at Britain’s Royal National Theater, stars none other than Hugh “Wolverine” Jackman as Curly (well, his picture is on the vid-cover), along with Maureen Lipman, Josefina Gabrielle, David Shelmerdine and Jimmy Johnston. This version is a bit more of a drama than what you usually see portrayed, which adds a lot of depth to the tale. Recommended.

For the unenlightened, Wu Dang is where the martial art of Tai Chi was born, and this exciting tale centers on the love of these arts to the people of the region — a place rumored to hold a golden treasure. A fallen man (Vincent Zhao) sponsors a martial arts competition, using his Kung Fu master daughter as a distraction while he seeks this treasure. Directed by Patrick Leung.