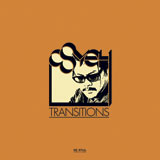 Defying expectations is risky, but even more difficult for experimental musicians playing pop. That challenge — of a player known for more demanding fare stretching out into “less serious” realms — is readily accepted by C.S. Yeh on Transitions. A violinist known for his Burning Star Core project, Yeh plays every instrument here, with a shaky retro sensibility reminiscent of 1980’s one-man band My Dad Is Dead. Yeh takes more than a few chances on Transitions: His icy vocals, rudimentary guitar work and synth-driven rhythm tracks are far more direct than previous experimental efforts, while lyrics like I thought that good luck routed me to Cleveland might be too tongue-in-cheek to take seriously. But with sly nods to the underground and the mainstream, covering both Father Yod and Stevie Nicks, Yeh makes their songs his own.