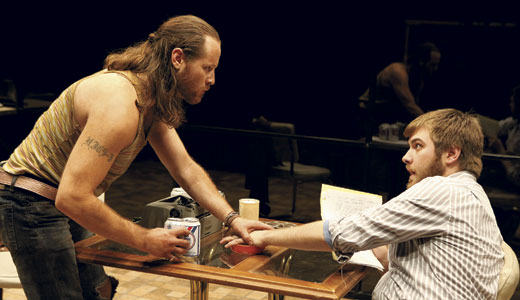 Sam Shepard takes everything that’s ugly, misguided and embarrassing about sibling rivalry and makes it palpable, humorous and beautiful in his play that first premiered on Broadway in 1980 about two brothers from a desert town in Southern California. He’s the king of “masculine” perspective theater, and Actors’ current production of “True West” does a great job capturing the caged-animal energy for which the script is known.

Lee and Austin are estranged brothers who reconnect at their mother’s house while she is vacationing in Alaska. Austin is there to work on his latest screenplay, and Lee is there to break into neighbors’ houses to steal stuff. Both are avoiding their father, who lives in the nearby desert and drinks a lot. Austin is expecting a visit from a flashy Hollywood producer to pitch his latest story idea, and Lee is drinking. A lot.

The play is laid out in nine tight, gritty, funny scenes. As the story progresses, the brothers reverse roles in an attempt to prove they’re capable of doing what the other can do. Lee ends up successfully pitching his real-life modern Western to the producer, and Austin decides to prove he can steal things, too. The result is a descent into the recesses of family love and hate and brotherly competition and ultimately the decision of whether or not to follow their father into the desert and, thusly, into the bottle. Things don’t go well. And then they get worse.

Adam Rapp’s staging on Andromache Chalfant’s set was inspired and gave a modern visual twist to the script. The play takes place in a main room of the mother’s home in a suburban neighborhood, and in Rapp’s staging, it is enclosed in plexiglass, encasing the actors and the action with brilliant results. It allowed them the freedom to go as wild as they wanted, throwing beer cans, toast and themselves around the set with abandon. By the final scene, it was like watching two caged animals spar, and it was the jewel in this production’s crown.

Nate Miller did a credible job as Austin, the brother who seemingly has it all; his performance in the final scene is particularly brave, proving he is a man committed to his craft. William Apps as Lee was especially impressive as the screw-up brother you can’t help but root for. His yearning for something better without knowing how to get it was palpable and heartbreaking.

Both men did a great job conveying two brothers who get caught up trying to define themselves by the perceptions they’ve created for themselves and each other.