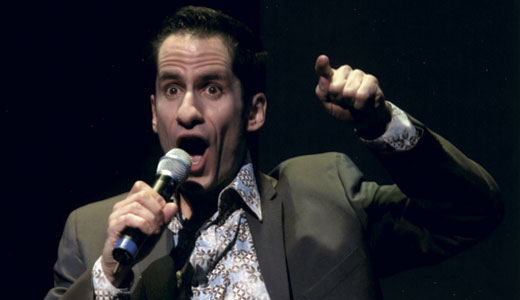 Seth Rudetsky is an actor, musician, writer and Broadway fanatic. He even has his own radio show about all things Broadway on Sirius/XM Satellite Radio. And he’s not all talk. As a pianist, he’s performed in numerous Broadway productions, including “Ragtime” and “Les Miserables.” He brings his comedic “Big Fat Broadway Show” to town Saturday at the Kentucky Center as part of the LEO A Little Off Center series. We spoke with Rudetsky about his upcoming show and his love for — you guessed it — Broadway.

LEO: For folks not familiar with what you do, describe your current show and your title as a “Broadway deconstructionist.”
Seth Rudetsky: I think of this show as a combo of “The Daily Show,” “America’s Funniest Home Videos” and “Broadway’s Best Bloopers.” The last isn’t really a TV show, but it should be! I travel around the country with my audio and video collection and show the audience what’s brilliant about Broadway and what’s a splitting headache and why. For instance, Patti LuPone in “Evita” is amazing. Madonna singing the exact same material in the film is devastating. I compare and contrast. And you don’t need to know anything about Broadway to appreciate it. I love doing the show because I’m doing comedy yet playing the piano yet teaching people all about Broadway yet watching Cher sing “West Side Story.” I literally show that video. You will not recover.

LEO: All-time favorite Broadway musical and why?
SR: I love “West Side Story” because it brings the story, the music and the dancing all together. Everything advances the story; it doesn’t stop so someone can do a high-kick! I also love “Gypsy” and “Evita” and so many others. I saw my first Broadway show when I was 4 — it was “Hair”! My parents were very hip and took me to see it right before it closed.

LEO: You’ve worked with some Broadway legends; do you have an experience that rises to the top as your favorite?
SR: I grew up watching the Tony Awards, so it was especially exciting when Rosie O’Donnell asked me to write the opening number in 1998. I love lady belters, and I got to pick who was in the number, so I was not only writing for the Tony Awards, but my number featured three of my idols: Jennifer Holliday, Patti LuPone and Betty Buckley.

LEO: Have you ever been to Louisville?
SR: I have never been to Kentucky! I’m so looking forward to some delicious dessert that I’m sure people in NYC try to make but don’t know the right ingredients.

LEO: What’s the next project for you?
SR: I just finished the sequel for my young adult book (“My Awesome Awful Popularity Plan”), and if Random House doesn’t fire me because it was two months late, I have to start editing it. Plus, I wrote a musical with my friend Jack Plotnick based on those amazing 1970s disaster movies. Our show has an earthquake, tidal wave, killer bees, etc. We ran it a few times last year and got an amazing New York Times review. We’re planning on opening it off-Broadway in a few months.