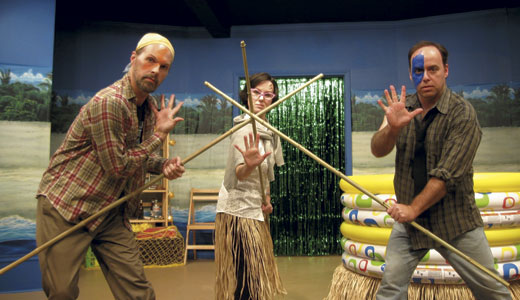 Tilt a test tube to one side, and whatever’s in there will have more room to grow. Walden Theatre has a series named after this lab technique, and for the past four seasons, they’ve been presenting new scripts from up-and-coming playwrights that feature teenage characters and real teen issues, challenging the Walden students to focus inward. Recently, in true Slant fashion, a larger concoction would develop from the experimental notion of this series and the grassroots movement happening in Louisville’s theater scene.

There was an “aha moment” last summer when Walden artistic director Charlie Sexton and managing director Alison Huff were in a meeting with other community theater members, sharing stories about theater in the city.

“Theater has changed so much, not just in the 40 years since the Humana Festival started, but just in the last five years since I’ve been involved in the theater scene,” Huff says. “There’s this new crop of semi-professional theater companies. These are folks who are educated, trained and masters of their craft, and doing great work that not enough people in the community really know about yet. Right when I was thinking that, Charlie leaned over to me and said, ‘We need a festival!’”

While the theatrical productions are the focus of the event, they didn’t stop there. If there’s one thing the Slant masterminds knew going into this, it’s that Louisvillians are serious about their festivals. There will be food trucks, live music, interactive workshops, after-parties at Meat, The Bard’s Town and Decca, with more live music from local faves like Justin Lewis, and lots of other little surprises. Savage Rose, Le Petomane, Theatre [502] and the Louisville Improvisors, all groups with members connected to Walden in some way, will each offer a show to rotate throughout the festival. Squallis Puppeteers will work their puppet magic and hold a workshop, as well as ART+FM, who will share contemporary radio story techniques used on programs like “This American Life” and “The Moth.” Comedy ventriloquist team Ricketts and Randy will perform “A Man, a Dummy and a Dream,” Maria Whitley of Shine will host a Nia workshop and workout, and Typecast Publishing will present Chris Mattingly’s “Scuffletown: Voice of the New South” and “The Kids Can All Write,” an afternoon of spoken word poetry.

“As a first-time guest producer, I can’t tell you how excited Typecast Publishing feels to be included in a theater festival,” says publisher Jen Woods. “We love getting out of our comfort zone of the printed page and pushing ourselves to explore a new medium that, all in all, feels like an obvious and overlooked merger of two branches of the arts.”

Walden Theatre’s Slant Culture Series production this year is a new script from D.W. Gregory, who will have a Q&A after the Saturday performance of “Salvation Road,” about a teenage boy’s journey to self-awareness triggered by his sister leaving home to join an alternative religious group. Le Petomane is remounting their popular original comedy “5 Things,” and Savage Rose will offer Luigi Pirandello’s intimate and compelling “The Man with the Flower in His Mouth.” In case you missed it the first time, or want it again, Theatre [502] is restaging their first production, Mat Smart’s “The Debate Over Courtney O’Connell of Columbus, Nebraska,” featuring alternate endings. The Louisville Improvisors are getting literary with “Buy the Book,” where a guest author (either Barry Bernson from WDRB or Councilman Tom Owen) will read a selection from his book and the improvisers will interpret it, hilariously.

The central ambition of this festival is to broaden and deepen audiences around town, and mix up the ones that already exist. “Every audience member for any one of these entities has something new if they explore what the other one’s doing,” festival director Teresa Willis says. “I think that was one of the genesis concepts. They all have audiences, so if we put everybody in the same place, we can have this word we keep using: ‘cross-pollination.’”

The festival will kick off Thursday night with a launch party at Walden, where Cheyenne Marie Mize and Joel Henderson & the Forty Gallon Baptists will perform, along with food, drink and merriment with all five of the festival producing companies. A full, easy-to-navigate schedule with info about each offering is on the festival’s website, as well as a link to buy tickets.