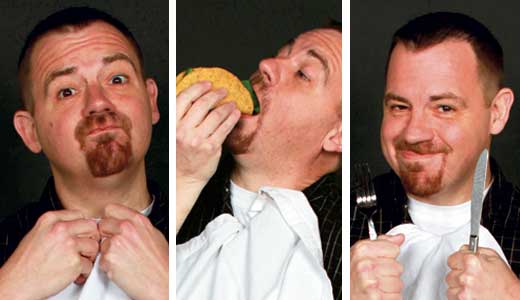 I recently started a new day job in Middletown, and along with the fresh work environment, I am also enjoying another aspect of the change — a whole new group of local restaurants to hit up at lunchtime.

Luckily for me, I happened across ZiaLaLa Café recently. This small, family-owned shop at 12220 Shelbyville Road (behind the unholy KFC/Long John Silver’s hybrid) not only has a surprisingly diverse menu of Latin and European fare, but also offers prices easy on the budget and a dessert case that could send even the most ardent sweets-addict into a diabetic coma.

I met my girlfriend Cynthia for lunch at ZiaLaLa recently, hopeful but unsure of what to expect. I’m here to tell you that I got everything I had hoped for and then some. The cozy, informal dining room isn’t indicative of the variety of authentic, fresh Latin and European fare, from Italian wedding soup to Venezuelan favorites such as arepas (which are sort of like mini sandwiches using corn dough with a variety of ingredients stuffed inside).

I immediately gravitated toward the “Flex Menu,” which gives you the option to combine multiple options for $6.99, be it soup and salad, salad and a panini, or soup/salad and your choice of two empanadas. Since I love variety, I couldn’t resist: I chose a small ensalada de ceviche along with a Venezuelan-style empanada and a Caribe?a-style empanada.

Cynthia, meanwhile, ordered a Venezuelan empanada and a Reina Pepeada arepa for just $3 each. We also ordered some plantain chips as a side.

Where to begin? The chips were fresh and homemade, slightly crispy and sweet. It was a nice start, but what really got my attention was my ceviche salad, which consisted of a mound of mini-shrimp ceviche and cilantro on a bed of greens, with two slices of avocado. The refreshing ceviche absolutely burst with lime. It was a delicious treat, and I wanted more.

Then I tried the Venezuelan empanada, which was a flaky pie about four or five inches wide stuffed with tender beef, red peppers, onions and cilantro. The seasoning was mild, letting the flavors blend together. Absolutely delicious. I could have eaten 10 of them.

My Caribeña — stuffed with minced, marinated chicken and cilantro with pica-pica and turmeric spices — wasn’t quite as spicy as I had hoped, but it was still tasty and was complemented well by the creamy dipping sauce (which tasted like some sort of mayo-based aioli, although I was too focused on the food to figure it out).

Did I mention this combo was just $6.99? Also, you can actually take a look at the pre-baked empanadas before you order, if you so choose. Each plate bears a card identifying the empanada type and detailing the ingredients. For instance, if you don’t like raisins, you’d want to consider avoiding the Chilean-style empanada, which is stuffed with ground beef, raisins, hard-boiled egg, onions and olives.

Well, Cynthia has a sweet tooth (heck, she has a whole mouthful of them), and was therefore transfixed by a display case filled with a variety of Latin and European desserts. After some mulling, she decided to finish off her lunch with a chocolate empanada. To say this pastry was delicious was akin to saying the sun is toasty.

“Oh my stars,” was her first-bite response. Then she gathered herself in silence for a moment. I am pretty sure she went someplace outside of this dimension, because I think she completely forgot I was sitting next to her. Or that I even existed at all.

Her assessment of the chocolate empanada once she composed herself? “Screw Hostess.” Yeah, apparently it was a lot better than a Twinkie. She does have a way with words, that girl.

Get more info on ZiaLaLa Café at zialala.com. And then get your butt down there and eat. Because, damn.