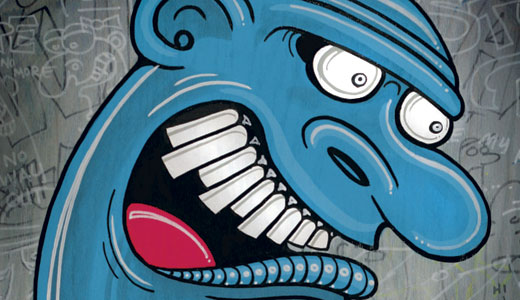 It’s time to stick your tongue to a frozen pole and relive your favorite “A Christmas Story” memories with Actors Theatre’s annual holiday production. Directed by Drew Fracher, the beloved Christmas classic will be revived one final time — this is the last run Actors is planning for Philip Grecian’s stage adaptation. For reals. So go root on Ralphie Parker and his quest for an Official Red Ryder Carbine-Action 200-Shot Range Model Air Rifle BB gun. The 1983 film was written by Jean Shepherd, Leigh Brown and Bob Clark, and was set in the fictional town of Hohman, Ind., but filmed in Cleveland. It was released a week before Thanksgiving to moderate success, but has since gained a cult following. —Sara Havens

A year ago, LEO wrote about Nathan Salsburg’s once-in-a-lifetime discovery, via a Dumpster crew, of the late Louisvillian Don Wahle’s collection of 78s. Now, New York’s Tompkins Square label is issuing a three-record set culled from the 2,000-plus collection called Work Hard, Play Hard, Pray Hard: Hard Time, Good Time & End Time Music, 1923-1936, compiled and annotated by the musician and archivist, including 19 songs previously uncollected, and adding essays by literati John Jeremiah Sullivan, Amanda Petrusich and Sarah Bryan. Each volume is divided by topic, surveying “occupational and hard-time material, dance tunes and novelty numbers, and sacred pieces.” Salsburg hosts a listening party and discussion, and CDs (and vouchers for the upcoming vinyl version) will be sold. Also, you simply must try the cookie. —Peter Berkowitz

Hailing from rural western Pennsylvania, Black Moth Super Rainbow traffic in a sort of murky, low-fi but high-tech psychedelic pop, equal parts new wave and krautrock (though sometimes not resembling either). Their fifth album, Cobra Juicy, was just released last month, and some might say it’s their most ambitiously accessible record yet. Main man Tobacco still sings enigmatic lyrics through a vocoder, but the melodies seem a bit more straightforward, almost like radio hits from an alternate universe. Much like the vintage arcade games that line Zanzabar, Black Moth Super Rainbow offer a trippingly fun look backward. With opening sets from Casket Girls and Karass; tickets are available at Astro Black and Underground Sounds. —Joel Hunt

Venerated St. Louis punk icon Bob Reuter is bringing his Southern-fried, blues-soaked brand of punk to Louisville Thursday. Reuter has left his mark on the St. Louis scene, both in his pioneering DIY work with his first band The Dinosaurs and with his award-winning, vinyl-only community radio show, “Bob’s Scratchy Records.” Touted as the forefather of St. Louis punk, Reuter has been performing since the ’60s, and his rock ’n’ roll credentials are evident with his newest band effort, Alley Ghost. Presented with a Mick Jagger sneer, Alley Ghost maintains an upbeat and energetic rhythm, matched only by Reuter’s intense onstage presence. Black Bird County kick off the show with their version of alt-country-infused rock. —Syd Bishop

The renowned bluegrass band Fletcher Bright and the Dismembered Tennessseans sits in with the Louisville Orchestra and pops conductor Bob Bernhardt for NiteLights Series events Thursday at the Brown Theatre and Friday at the Ogle Center on the IUS campus in New Albany. The Dismembered members and their orchestra accomplices pick and saw country standards such as “Ashoken Farewell” and “Southern Flavor,” with a special take on the “Tennessee Waltz,” written, of course, by Louisvillian Pee Wee King and Red Stewart. There’s a happy hour for concertgoers preceding the Thursday show — 4-6 p.m. at the BBC, just around the corner from the Brown on Fourth Street. —Bill Doolittle

Whether or not your candidate won the election, you can still celebrate and feel patriotic with this cheery little Tony Award winner. “Ragtime: The Musical” has spectacular tunes and a touching story, and CenterStage always brings it when it comes to musicals. “‘Ragtime’ has one of the most powerful and beautiful scores in all of musical theater,” says director John Leffert. “It is rich in history and cleverly weaves together the threads of the story of America from many different points of view.” A cast of 35 tells the story of three New York families at the dawn of the 20th century, and celebs like Booker T. Washington, Emma Goldman, J.P. Morgan, Harry Houdini and Henry Ford help tell the tale. —Jane Mattingly

Ellen Birkett Morris has an eye for detail. From the “blush gold skin (and) ruby seeds” of a pomegranate to cans of shoe polish, Morris creates poetry from the minutiae of our world. Her poems explore themes of love and loss, what she calls “the small but transcendent moments that define our lives.” Morris’ latest collection, “Surrender,” confronts the loss of her father and the challenges of entering her 40s with poems such as “Louisville, KY, USA” and “Oxblood.” Sherry Chandler, author of “Weaving a New Eden,” describes Morris’ work: “These short poems sometimes seem deceptively quiet, but each shines as softly burnished as a pearl.” If you can’t make this week’s INKY Reading at Bard’s Town, you can catch these pearls of poetry at Carmichael’s next Friday (Nov. 16), or at The Bard’s Town’s Stone Soup Reading Series on Nov. 25. —Jennifer Harlan

Just reading her name instantly calls up a mental image of one of her surrealist self-portraits. We all know the face, but perhaps not as much about Frida herself, other than she had health problems and was married to muralist Diego Rivera. Bellarmine University theater program director Carlos Manuel is bringing the famous painter to the stage in a completely original theatrical piece based on research he conducted in his native country of Mexico. Manuel has collaborated with some Actors Theatre staff on set and costume design, and brought in some Bellarmine music and art students to help flesh out the production, which will combine theater, Mexican cultural traditions and magical realism. —Jane Mattingly

In this era of rising crime, virtual friendships and overbooked schedules, it’s common to come and go each day without ever really getting to know one’s neighbor. And that’s a damn shame, as human connections are what make life worth living. Thankfully, the good people at the Muhammad Ali Center are reminding us to embrace our interconnectedness during a celebration dubbed “Hello Neighbor: Day of Dignity, Day of Compassion,” featuring international food, community resources, family activities and live entertainment. All museum exhibits will be open to the public, and though admission is free, visitors are asked to bring a donated item for Kentucky Refugee Ministries, which is seeking blankets, shower curtains, alarm clocks, can openers, towels, and other basics for fellow Kentuckians in need. Donations are optional, but do the right thing … it’s what this day is all about. —Sarah Kelley

When a young Conor Oberst was getting his braces removed in greater Omaha, Simon Joyner was singing the blues. From Joyner’s outspoken, slide guitar-embellished tunes emerged the defining sound of his hometown. A legend among the Omaha music scene, Joyner remains hidden in the underground, yet he was an inspiration for Oberst as the budding folk musician learned his chords. Joyner comes to Louisville to spread the message of Ghost, his new vinyl-only double album funded through a Kickstarter project. And he’s bringing a full band along with him. The Louisville folks of Bro. Stephen and Tender Mercy, who will also perform Sunday, must also owe their slow sailing sound to Joyner’s influence. There won’t be a more sincere show in Louisville than this. —Lara Kinne

Louisville looks to the film “Winter’s Bone” with pride, seeing as how homegirl Jennifer Lawrence’s performance was at the center of the character-driven slice of contemporary backwoods gothic. But Debra Granik has best claim on being the proud parent after directing and co-writing the sleeper hit, and she’s heading to town for Spalding’s Festival of Contemporary Writing. The 2010 film’s multiple Academy Award nominations weren’t Granik’s first recognition — she was Sundance’s Best Director in 2004. Her talk at Spalding’s auditorium is free, so drop on by. There are also numerous events for several days with multiple writers from across the spectrum of the artistic written word. Some of the participants on this go-round will be Helena Kriel, Kirby Gann, Crystal Wilkinson, and Sena Jeter Naslund, and the full schedule can be found at spalding.edu. —T.E. Lyons

“I was probably a weird kid. While others were out perfecting wheelies or shooting hoops, I would insist that I be traced like a murder victim on paper that had been taped together,” says Nashville’s Dustin Dirt in his artist statement. Revelry Gallery is showcasing Dirt’s fun and accessible drawings this month in an exhibit titled “Weird Like Me.” Dirt’s characters are cartoony and spastic, which is a state of mind he prefers to work in. “I happily travel back to a childlike state of mind and create what could be described as polished, professional doodling,” he says. And he’s proud to call Louisville his second home. “I love the vibe of the city. It’s just got a certain energy that matches both my style and personality.” —Sara Havens

The red penguins atop 21c Museum Hotel are on their way to becoming icons. Photographer Keith Stone has taken them on a journey similar to the gnome in the film “Amélie,” including visiting the past, as in Margaret Bourke-White’s 1937 “Louisville Flood” image. “I am intrigued by these friendly, peripatetic red penguins that came into this world as a human-footprint message and now find themselves as sentries on the roof, witnesses in the bar and ushers at guests’ doors,” says Stone. “Art that has a meaning … in one setting (can) take on different meanings for a new audience …” The Cracking Art Group created the sculptures for the 2005 Venice Biennale. 21c recently announced that their Cincinnati museum hotel will have yellow penguins. Also showing are Joyce Garner’s “Table Paintings.” —Jo Anne Triplett

‘With Child: Art and Parenting’

Have baby, make art — or at least hope you can find the time. Artists/parents Lisa Simon and Skylar Smith realized “their artistic practice and passion was being swallowed up by the demands of careers and family life.” Their answer was to make art illustrating that dilemma. Along with Simon and Smith, other artists in the exhibition are Adrienne Callander, Alice Stone Collins, Shawn Hennessey, Aerie Meredith and Gibbs Rounsavall. The show also features a catalog and free family workshops with art educators from the Speed Art Museum. On Sunday from noon-3 p.m. at the Huff Gallery, families can participate in the Artist Trading Card Starter Workshop. The following Sunday, Nov. 18 (same time and location), everyone can return for the Artist Trading Card Make-It & Swap-It Workshop. —Jo Anne Triplett