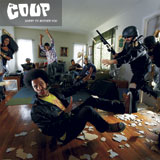 Boots Riley takes too long between records. Granted, he’s not on the Sade/Anita Baker eight-year plan, but when your music is as vital and important as his, we need regular updates. Sure, that Galactic album and Street Sweeper Social Club were decent placeholders, though not fully of the funk and wit that The Coup have been giving us for 20 years. Boots is the king of emcee balance. Why can’t we, as he said, laugh, love, fuck and drink liquor? Doing any one of those to excess would make a person unbearable, but Riley has found the perfect mixture of each. Sorry may dabble a bit more in the punk of his Anti- label-mates than these ears would hope, but then, a perfect song like “The Guillotine” will hold me over until he seeks his shadow again.