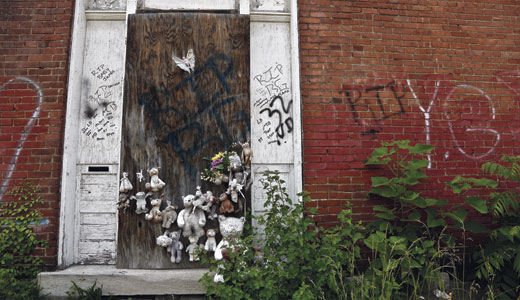 On the afternoon of Thursday, May 17, gunfire claimed the lives of 22-year-old Craig Bland Jr. and 24-year-old Tyson Mimms in the Parkland neighborhood. Two other men were also shot but survived.

LEO talked to a relative of Makeba Lee’s. She asked that we not use her name. Here is her story as told to and relayed by Anne Marshall.

I remember the first time I met Makeba, she must have been in elementary school. It was a family gathering. Her tiny, delicate frame and sweet face enticed every adult to scoop her into their laps and hold her. She loved books, a smart little girl. I remember that, too.

I’d like to tell you my relation to her and my name. Fear prevents me. In my family, May 17 doesn’t even exist in whispers. Where city leaders and strangers have approached that chaotic day with mental acrobatics, trying to tie causes with solutions, we don’t speak of it at all.

Here’s what I can say. I’m a mom. I’m educated. Order comforts me. I wake every morning at 4:55, pray for five minutes, and stir up the same brand of hot cereal for breakfast.

May 17 starts as unceremoniously as any other.

I finish work and drive to yoga, ignoring my cell phone’s tantrum of texts and voicemails.

A little over an hour later, my precise, well-balanced day still intact, I undock the mounting fleet of messages, unaware of their urgency. Messy specifics emerge from panicked voices: There’s been a shooting. It’s in west Louisville. Makeba’s been shot.

At home, I click on the evening news. It introduces me to 15 seconds that will probably haunt me for years, maybe longer. By now surely you’ve seen it, too. Bullets spraying. The screams ringing louder. Bodies diving to the ground. Relentlessly, this scene plays over and over on every channel, a staggering media pinwheel.

I watch standing in my living room. Two guys shot over here. Two other guys shot over there. A woman walked up to another woman and shot her. I hear this, but I still have hope. Maybe she was just at the wrong place at the wrong time. Makeba’s not a troublemaker.

I recall the last time I’d seen her. It was a few months back in the fall at a family event. She’d recently had her baby, who was being passed from relative to relative. A group of us huddled and caught up. A Central High graduate, Makeba had plans to attend Jefferson Community and Technical College. I think she was talking about nursing.

She said she was done with her boyfriend, the father of her child — Tyson. Her plans included school, being a good mom to her son. I felt relieved. I’d heard troubling things about her boyfriend, who wielded a pretty violent reputation. I’d never met him, didn’t even know what he looked like. This is just what I heard.

Another call comes from my family. Makeba’s dead.

I say nothing to my children. They’re old enough to process violence. But my family is intact, safe, miles away from where young relatives vocally plot retaliation and police tape still bandages a neighborhood. Tonight, I want to keep it that way.

At work the next morning, it’s obvious people know, forced smiles and such. I envision the quiet judgments: That’s the black girl. That just happened to the black family. I feel bad for her.

I stiffen at the thought of pity. I don’t want to hear how you know someone who got shot, too, or how young and full of promise Makeba was. Inevitably, well-meaning empathy crowds my day.

A co-worker tells me their friend’s sister-in-law knelt over Makeba after she was shot and heard her last words: “Tell my mom I’m sorry.”

This intimate moment, delivered in a day’s time by loosely connected strangers, lumbers in silence between us.

Makeba’s death now has texture, a saddened regret. I carry it with me to my desk, turn out my lights, shut the door and take a call from a relative who tells me why and how Makeba’s life ended.

This all happened over a boy. Tyson Mimms. The boy. I was looking for more. There had to be more. I’d been clinging to the wrong place/wrong time theory. But a boy?

I’ll later figure out I did know what he looked like, having watched an episode of “The First 48” television show featuring Mimms in connection with a murder. (A charge that was later dismissed due to lack of evidence.)

No one deserves such senseless death. Not Tyson Mimms. Not Craig Bland Jr. Not Makeba. I wonder why Tyson hardened in life. Surely, he wasn’t born that way. And Makeba saw something in him. He filled a need. Love existed, to the point of death.

Even with context, I struggle to fathom why an argument in the streets would ever escalate to murder. A young relative tells me, “I don’t understand.”

I guess I don’t. My family’s roots lie in west Louisville, going back a few generations, but that’s not where I grew up. I’ve never lived amidst instability, poverty. But I recognize every young person deserves opportunity and guidance from the moment they’re born. As a community we fail to provide that far too often. It’s shameful.

A few days later, I arrive to what I’ll call Makeba’s funeral circus, a surreal exercise in grief and voyeurism. Across the street, stoic police stand guard. Tentacles of cables and wires arrange for live news reports.

Why are you here? I want to shout. Why are you rolling cameras on the front steps of a funeral home? What are you looking for? For a shooting to happen again? You want to be the first to get the shooting?

So much since the shooting has frustrated me: all the hand-wringing among city leaders, the incessant replay of the gunfire that killed Makeba. I wish I could scream, what does everybody want? Does everyone just want their piece of a big story?

At the service, I slip into a seat in the back, observing young men and women in blue and red — gang affiliations, I presume. Family members dressed in black mingle together. A police officer stands by Makeba’s casket. I spot her 1-year-old son in the arms of a relative, pointing at his mother.

Often in death you’ll hear, you know, she went to a better place. That’s not happening right now. Not at all. We don’t talk about our loss. We never talk about her. We never discuss him. Even when the baby’s around, we just leave that day in the past.

Maybe it’s our family’s way of healing. Either way, the pain, the void exists.

I eventually tell my children our relation to Makeba. But I warn them not to tell anyone, the main reason being I don’t want their friends, teachers or peers making judgments. People are going to assume stuff about you, I tell them.

I’ve always taught my kids that being black comes with a distinct reality. Lesson one: Always have a receipt if you leave the store with a purchase that’s not been bagged. Lesson two: Know how to talk to officers when they pull you over. Now this lesson: People will make horrible assumptions based on very little, like your blood ties to a shooting victim.

Sometimes I wonder if Makeba’s spirit heard those words to my children, if she listened in on me severing our ties. I wonder if she’s upset with me. I pray for her, our family. And I wish she could have pursued her life, rather than having her death define it.

Cheetara Goldsmith has a pretrial conference in December. No arrests have been made in the shooting deaths of Tyson Mimms or Craig Bland Jr.