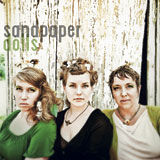 The Sandpaper Dolls have found their niche in haunting harmonies. That doesn’t mean they’re leaving behind the fundamentals they learned in previous bands. Each song, although a cappella, has percussive elements, a bassline and a melody. That percussion is reflected in various shapes and forms on their self-titled studio album. “Colors” uses breathing techniques to establish a subtle beat, and tongue clicks pepper “Cast Your Love” with a certain jazz. “Tesla Bossa” showcases some of the innovative ways they’ve been able to transform their voices into multi-dimensional instruments. Between chorus and verse, what sounds like a rousing horn solo overtakes the shuffle. The warmth and clarity of the recording is enough to make you feel like you’re standing a foot away from Anderson, Estes and Dennison. The occasional echo gives the three-part harmonies an otherworldly, timeless quality.