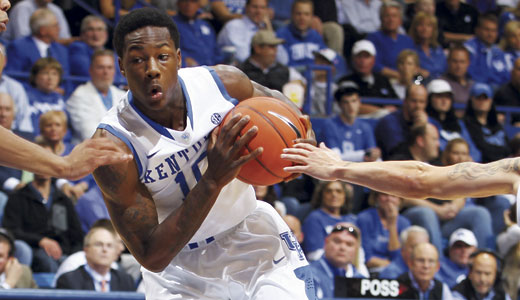 Whether right or wrong, Kentucky and coach John Calipari have earned such respect from national pollsters that a team with zero — zero — returning starters is ranked consistently in the top 3. Like last year, and the year before, and the year before, Kentucky and Calipari will rely on freshmen who, if you haven’t heard, are probably really good. So the hope is, as it has been in years past, that these freshmen will gel and become a juggernaut similar to the team Calipari led to a national championship in 2012.

The formula for success is simple: Get awesome players. And it works! This year presents the usual pull: Archie Goodwin, Nerlens Noel, Willie Cauley-Stein, and Alex Poythress are all super-talented freshmen expected to compete for a national championship in 2013.

But despite a new crop of great players, it is, for lack of a better term, a bridge year for Kentucky. With the national championship in the past and perhaps the greatest recruiting class of all time on the horizon, it would be easy for Cal to get at least somewhat complacent.

Additionally, as is the case with any defending champion, Kentucky will have the metaphorical target on its collective back. And, whether your personal allegiances allow you to admit this, playing Kentucky is everyone’s Super Bowl. It’s kind of a perfect storm.

It’s like 2008, sort of, when Billy Gillispie reduced Kentucky to a shell of its former mediocre self. Remember what Vanderbilt did to that team? It laughed its way to a 41-11 halftime lead in Nashville. Do you think the ‘Dores would have been so giddy shoving it up Auburn’s ass like that? Of course not, because no one cares about Auburn. People care about Kentucky, and they’re tired of hearing about them. And it makes people nuts. They’re tired of All-Access and recruiting and brow-down and twinning and three goggles and Matt Jones and the whole lot of it. So when Kentucky shows that sign of vulnerability, that one little crack, everyone will see it and pounce. And they can’t wait.

Look right down the road. Don’t you think Rick Pitino is sick of it? He has arguably his best team since 1997, and all he hears about every damn day is how good this group of players that have never played college basketball will be. Don’t you think Pitino is ready to undo the four-game losing streak to Calipari with just one blowout? And that’s just the tip of the iceberg. There are plenty of teams that would love the chance to embarrass Kentucky. That’s the danger of over-exposure: It’s not as fun when things aren’t going your way.

He didn’t miss then, so why now?

Who’s to say this group of freshmen is any less talented than previous years? As difficult as it is for some people to understand and accept, there is something John Calipari can do that other coaches can’t. If every coach could develop freshman talent as quickly and efficiently as he does, they would. (Remember Xavier Henry? Of course you don’t. See?)

So when Cal trots out three freshmen starters Nov. 9 against Maryland, they may look a little rickety. They’ll turn the ball over a thousand times and he’ll talk about how bad they are and how this team is different and he’ll end up calling someone a motherfucker or something and, slowly but surely, this group of 18-year-olds will start figuring it out. And by March and beyond — a time in which Calipari is 27-3 during his tenure at UK — they will be right where they always are. Who can argue that? It’s basically law now.

And to some extent, it doesn’t even matter who’s under the uniform. Sure this space could be filled with the merits of Noel and Poythress and Goodwin and elder statesmen Ryan Harrow, Kyle Wiltjer, and Julius Mays, but there isn’t really much to go on — aside, of course, from an ark of high school awards and accolades.

But none of that really matters. Sure these guys have to have talent, but a lot of guys have talent. At this point, it’s the laundry more than anything. It doesn’t matter if it’s Goodwin or Michael Kidd-Gilchrist or DeAndre Liggins — Cal has figured out how to get them there. Sometimes it takes a little while — maybe a month or two — but Kentucky will be back where they have been the last three years come March.

So this could be your best chance, America. But you better get your shots in now, because it won’t last long. l