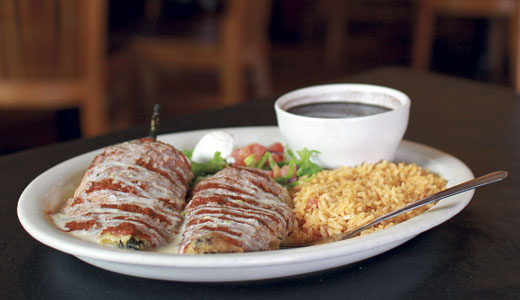 Before we break to the food, let’s devote a moment or two to the appreciation of modern American folk art. Seriously, now, work with me on this. Visualize, if you will, Edward Hopper’s 1942 painting “Nighthawks,” three anonymous figures and a short-order cook seen through the plate-glass windows of a spartan diner on an empty city street very late at night.

Ha! Gotcha! You’re looking at the picture in your mind’s eye, all right, but I’ll bet a quesadilla you’re actually picturing Gottfried Helnwein’s “Boulevard of Broken Dreams,” a 1984 parody that copies Hopper’s urban scene but places Humphrey Bogart, Marilyn Monroe and James Dean on the diner stools and pops Elvis into the soda jerk’s outfit.

Whichever rendition of this evocative painting you prefer, I’ll bet we can agree on one thing: The diner in these paintings isn’t really the kind of eatery that would draw you in. Let’s put it simply: The painters’ imagined diner lacked what real-estate sales people call “curb appeal.” Curb appeal draws you in to a space. Its opposite makes you want to pull away.

So, you want curb appeal in a local dining room? Allow me to point out Ramiro’s Cantina. You’ll be hard-pressed to find a more inviting facade along Frankfort Avenue’s Restaurant Row, with its large, brightly lighted front windows framing crowds of happy diners. We could call it the “Boulevard of Funny Dreams” and populate it with Steve Martin, Chevy Chase and Martin Short, decked out in full mariachi attire and belting out “We are the Three Amigos.”

Yeah, it’s that kind of place. You could call Ramiro’s “son of Sol Aztecas,” really, as owner Ramiro Gandara, who was a partner in this outpost of the local Sol Aztecas mini-chain, runs it on his own now, placing his first name over Sol Aztecas’ on the sign out front.

OK, fine, you foodies say. But what’s changed inside? Not a whole lot, really. The big old house that has been home to a string of eateries is divided into several intimate dining rooms. A large, convivial bar and that convivial space across the front appear to be later additions. Yellow stucco-like walls bear Mexican decorations, and the tables are draped in black oilcloth.

The menu isn’t exactly the same as Sol Aztecas, or for that matter Los Aztecas, or El Nopal or El Tarasco or any of the other Mexican-owned, Anglo-friendly Mexican (not “Tex-Mex”) mini-chains around town, but they all contain similar, familiar dishes — tacos, burritos, quesadillas, enchiladas and the other usual suspects — at family-friendly prices. Only one or two items (like a $16.99 strip steak, a one-pounder) come in at more than $15, and a lot of filling choices are under $10. Full bar service includes short wine and beer lists plus margaritas, daiquiris and mixed drinks made with Herradura tequila, olé!

The bottom line is the food, though, and there it’s a mixed bag that tilts to the positive. Our main courses and a dessert were splendid, but side dishes seemed a bit “meh,” leading me to wonder if there’s a solid chef in the kitchen without a strong bench for backup.

Complimentary chips and salsa were first-rate here: Red, white and green chips, the colors of the Mexican flag, were crackling fresh and came with a beaker of sweet mild salsa and one billed as “hot” that wasn’t lying about that.

Queso fundido (molten white cheese with peppers and onions, usually $7.49) was apparently free during our Tuesday evening visit, as best as I could ascertain from our server’s broken English.

Three pork carnitas tacos ($11.99) came in single soft tortillas garnished with fresh cilantro and onions. The pork was not fried in traditional carnitas style, but that didn’t bother us at all. It was tender and juicy and falling apart, as good as the best Cuban lechon asada.

A Poblano dinner ($11.49) featured a pair of fat, green poblano peppers stuffed with molten white Mexican cheese and cloaked in a blanket of spicy dark-reddish ranchero sauce. Another big win.

Side dishes, as mentioned, didn’t match the mains. The appetizer queso was thin and runny and didn’t come with service plates, which made it tough to get it from dish to mouth without unseemly dripping, but we had no complaints in the flavor department. Mexican rice was bland; tiny garnishes of salads and pico de gallo the same, and I couldn’t detect any seasoning in the black beans, although the brown charro beans were better.

Flan for two ($6.99), a slab as big as a short stack of iPhone 5s, restored our spirits with an authentic rendition of this creamy Latino custard.