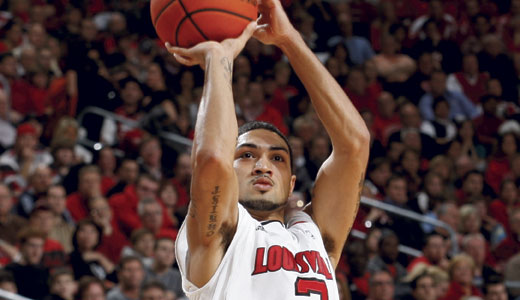 It’s in the Cards.

The University of Louisville will win the 2013 NCAA Men’s Basketball Tournament.

Because, frankly, it is time. Because well into Act III of the passion play that is Cardinal hoops, the audience is getting restless. The curtain can fall only after a Hollywoodland ending.

There is no other plausible finale to this drama. Only the inevitable title to be savored.

Act I — The Set Up. Coach Peck Hickman comes from Valley High, builds a basketball powerhouse. Wins the NIT in 1956. Blasts the University of Kentucky in the 1959 NCAA. Constructs the program with two local centers, Atherton’s Charlie Tyra and Seneca’s Wes Unseld. Passes the torch to longtime assistant John Dromo.

Then the bottom falls out. Even Hall of Famers misplace their mojo. Losing seasons. The mighty had fallen. It was time for a change.

Ebullient, he leans over the balcony, screaming.

“We got Pitino!” reverberates off the gray stone walls.

Before Rick the Savior took the rostrum that night at the convention center, Cardinal Nation loathed the former Wildcats coach. Until the moment he stepped to the mic — when Owsley Frasier scooted his wheel chair closer to touch the hem of his garment — Rick Pitino was evil incarnate.

One longtime athletic department employee murmured, “I don’t like this a bit.”

Cardinal fans bit their lips, held their tongues. Some embraced the new paradigm. Some accepted it begrudgingly. Some still bristle.

Yet one thing was certain that day in 2001 to everybody who wears red and black. Pitino would bring a third national title to the Belknap Campus. At least one, maybe more if he didn’t run off afterward as he was wont to do.

No doubt about it. So mighty was his coaching prowess, so complete was the resurrection he fostered at Kentucky, it was inevitable.

Coach Pitino would lead U of L to the Promised Land again. The deal was done. The only variable was time.

A dozen years have passed.

What is there to show for it?

Sure, he inherited a talent-less squad, but it’s been more than just a bumpy beginning. There was Brandon Bender’s petulance. T-Will’s mugging to the masses. Stultifying underachievement in the regional final against Michigan State.

A mysterious medical leave. An extra-marital affair that became a national scandal.

That hope-inducing last-minute comeback against Tennessee during The Rick’s first season. The redux against Marquette in the Yum! Two how in the hell did we get here but no chance to grab the crown Final Four appearances. Two Big East tourney titles. Amazing Regional Final comeback against West Virginia. That meltdown in Lucas Oil. Those first round no shows against Cal and Morehead.

White suits. Infra Red unis. A new gym. Five dollar boxes of popcorn to pay the freight. Longtime fans pushed to the back of the ticket line.

Francisco and Taquan and Ellis and Preston. Kuric going off against ‘Cuse in the Freedom Hall sayonara.

But, but, but … no national championship(s).

Act III, Scene 2 — The Time Has Come. This season’s talented and engaging band of Cardinals, hungry for more after last campaign’s astonishing near miss, has assembled for the team photo.

They and trainers and assistant coaches get settled in chairs and on risers. They are poised, anxious and ready. Cameras are in place.

They await the director and his direction.

For all his flaws, Rick Pitino is a marvelous basketball coach, one of the best in the game. He is a master of psychology. His pre-game planning is as good as it gets. His players believe in him and his demanding ways.

He strides in with an air of confidence. His hair is perfect. The photo is complete.

This is not a bridge season. This is the destination.

There are promises to be kept.

All variables are accounted for: Siva, Dieng and Van Treese provide a mature presence; Hancock, a measured leadership. Blackshear, Behanan, Ware and Nunez are untapped resources of talent, anxious to put it on display. Russ Smith is the sparkplug; Silent L, the X factor.

The actors are in place.

The director, ready to fashion the season that has been a dozen years in the making, yells “Action.”

It’s in the Cards.