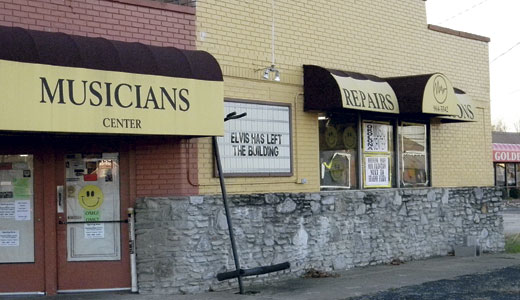 The Internet has irrevocably altered the economic landscape, forcing hard choices for small and local businesses. Just one year after ear X-tacy locked its doors for the last time, Louisville experienced yet another loss as one of its great hidden treasures, Professional Musician’s Center, closed after 53 years.

Located in the heart of Okolona, PMC was more than just a South End guitar store. It was an environment that fostered a sense of inclusivity, never catering to any one particular style or person.

Bill Sutherland first arrived at what was then the Preston Musician’s Center in 1972, as a student. He became a teacher in 1984 and then owner in 1987, when predecessor Dave Zirnheld decided to retire and pass him the torch.

“Dave called me and asked me if I wanted to have the store. I just kind of ‘acquired’ it, I guess,” Sutherland says. “I have always felt like maybe I ended up owning the store because I loved it the most.”

It is this love and humility that sits at the heart of Sutherland’s longevity. He explains, “The store was my home. It was a tangible manifestation of my personality. You should make people feel comfortable in your house, or you should not ask them over to start with. The store, for me, was about art; it was not about money. It was about helping people create their own art.”

This desire to create a safe space for creativity and expression was extended not only to his customers, but also to his employees. Everyone was a guest, and he felt the only way to accomplish that was to have a team of individuals that he could trust and respect to help keep his house in order. Sutherland notes, “The store was never run on a boss-employee template. We were a brotherhood and are fiercely loyal one to another.”

But the store had run its course, partially put out by the harsh fiscal climate, but primarily because Sutherland was ready to call it a day. Deciding to go out on his own tune, he says, “In life as well as in music, timing is everything. As a musician, I have always felt it was best to end a performance on a high note, and I wish to do the same with the store.”

For every ending, though, there is a new beginning. Longtime employee Colin Ennis has been passed the torch and is opening the Okolona Music Center right across the street, within eyesight of the old PMC building. That the tradition is continuing is a testament not only to the perseverance of local businesses, but also to the power of community in creating a success.

The last PMC customer was a former guitar student and seven-year patron, Daniel Dambros. Sutherland wrote on PMC’s Facebook page that Dambros had not known he had won the store’s unannounced “last customer contest.” As his prize, Sutherland plans to buy Dambros a guitar at the new store across the street.