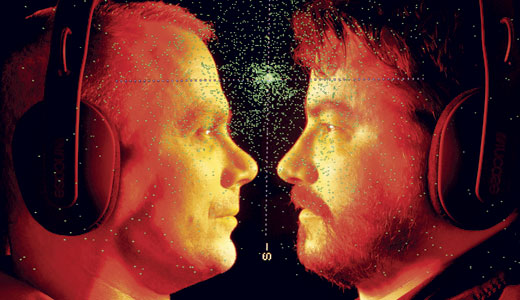 Louisville native Drew Daniel and his partner M.C. Schmidt founded experimental electronic duo Matmos in the mid-1990s, and they’ve become known for their high-concept works, like an album of music made from the sounds of surgical procedures.

Matmos released a new EP last month, The Ganzfeld EP. It’s their first release for Chicago’s Louisville-friendly Thrill Jockey label and serves as a teaser for a follow-up full-length album, The Marriage of True Minds, due on Feb. 19. The release of Ganzfeld celebrates the 20th anniversary of both the label and the couple.

Both recordings are based upon the concept of telepathy. Matmos subjected strangers and friends to the ganzfeld (“entire field” in German) experiment, which tests for ESP.

A telepathy experiment seemed to make sense, so over a four-year period, the duo filmed subjects who were isolated in rooms, lying down on a mattress with their eyes covered and white noise-filled headphones on their ears — “basic sensory deprivation,” Daniel notes cheerfully.

“We would be in another room, either adjacent or beneath them, send a signal out, and attempt to transmit the concept of a Matmos record into their minds,” he continues. “They were encouraged to relax and empty their mind, and just try to describe out loud anything they were seeing or hearing. We would record this, and then turn the transcripts into songs.

“Of course, there’s a tremendous amount of leeway about how you turn it into a piece of music, so, far from being constrained by what they generated, we found it really helpful.”

Though both electronic and experimental music are often seen as overly serious, Daniel — a professor of Shakespeare by day who has written a book-length essay about the British industrial music group Throbbing Gristle — saw the exercise as being “like a great sort of parody of artistic communication and of conceptual creation. It seemed like a nice way to isolate the thought and the mind of artists, and to send up the idea that that is what is creating music.”

Their subjects ranged from a teen to a 70-something, and by nature of their world, included some music people (a Pitchfork contributor, a death metal bassist and more). “That helps in some ways,” Daniel says, “because they already know how to describe something in musical terms. It’s bad, too, because you can feel like, ‘Oh, they’re just feeding me something that they know I want.’ So it’s not authentic, it’s somebody going, ‘Oh, an ostinato.’ Inside-baseball stuff.”

Instead, he hopes it works as “a wonderful return to a lack of control in that distance between what I hope people will get out of it versus the conditions in which they might actually listen to it.”

In an era where people treat music like files to be downloaded, Matmos’ response is to include moments that are raw, spontaneous and unable to ever truly be re-created. A tour planned for next year will incorporate onstage ganzfeld experiments at each stop, as the musicians play along.

Daniel returned to his hometown in September to speak at the memorial service for his late friend and collaborator, Jason Noble. (Noble’s group, Rachel’s, released a split record with Matmos in 2000.)

“Yeah, that was a really powerful day … So many people, I thought, rose to the occasion.” Daniel was glad so many paid tribute to how funny and grounded Noble was without sacrificing the integrity of his memory.

“I was definitely nervous about the risk of pretentious, over-inflated language, because funerals can make us want language to become sublime, to confront our terror about loss. I was really glad that people resisted that and instead kept the focus on Jason as a person. That was an amazing day. A really sad day, too, because the more we were reminded of Jason, the more we were reminded of the person that’s gone.

“It’s hard to talk about, because I get upset. I get angry.”