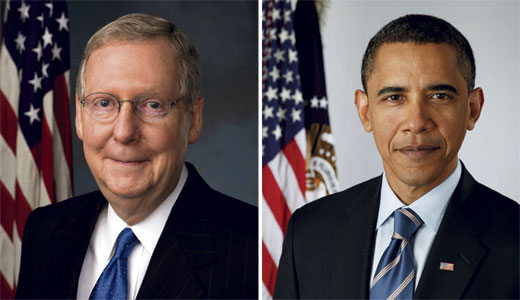 Nearly three hours after the media declared his re-election campaign victorious, President Barack Obama finished a triumphant speech in Chicago, leaving the rapturous crowd to make a phone call to the man who for two years openly admitted that his No. 1 goal was to make sure this moment did not happen.

Sen. Mitch McConnell did not take the call. Apparently, he was already asleep.

But at that very same moment, McConnell’s office released a “congratulatory” statement, which was neither an admission of sound defeat, nor a sign that voters had awakened the Republican Senate leader enough to change his tune.

“The American people did two things: They gave President Obama a second chance to fix the problems that even he admits he failed to solve during his first four years in office, and they preserved Republican control of the House of Representatives,” the statement read.

McConnell’s statement went on to say that voters had “not endorsed the failures” of Obama’s first term, a telling denial of who exactly “failed” and who won that night. It also neglected to mention the second largest development of the election.

Republicans lost two seats to Democrats in the Senate, a feat that absolutely no one could have foreseen a year ago, especially McConnell, who was a shoe-in to take his long-coveted title of Senate majority leader once Republicans knocked off a slew of vulnerable Democratic incumbents.

This total congressional takeover by Republicans did not happen, thanks in part to Tea Party candidates’ compulsion to make strange and offensive comments about abortion and rape, but also due to the same demographic changes that swept Obama back into a second term: a young, female, non-white electorate that thoroughly rejected the policies, principles and rhetoric of the Republican Party.

In several Senate races where Republicans were dealt an unexpected loss, the Democratic candidates scored points with voters by painting their opponent as just another soldier who would fight under the command of the general leading America into a hyper-partisan ditch: Sen. McConnell.

While many Republican politicians, operatives and media figures deduced from this drubbing that they must change their ways in order to stay politically viable going forward, McConnell appears to be leading the other significant faction of the party, expressing a stubborn commitment to stand their ground.

Despite McConnell’s public and private marching orders for his party members since the day Obama was sworn in — stay in unanimous opposition to Obama’s agenda in order to deny him legislative victories so that Democrats could have full “ownership” of the lousy economy they inherited — he said that Obama was the one who must compromise.

His statement opined that voters wanted Obama to “move to the political center” where McConnell would happily “meet him half way,” assumedly no longer utilizing the record-shattering 246 filibusters that Kentucky’s senior senator had orchestrated over the last four years.

The question of where the Republican Party goes over the next four years likely won’t subside anytime soon as the nation’s already fragile economy is speeding toward the so-called “fiscal cliff” on Jan. 1.

With the tax rates for everyone set to rise if no action is taken, along with $110 billion in federal budget cuts triggered by last summer’s sequester deal, many expect these two joint forces would plunge America back into a recession.

Whether or not McConnell failed on election night, the path ahead, once again, is largely up to him.

National Republican Senatorial Committee chairman Sen. John Cornyn — soon to be second in command to McConnell in the Senate — had a much more sober assessment of election night than McConnell.

“It’s clear that with our losses in the presidential race, and a number of key Senate races, we have a period of reflection and recalibration ahead for the Republican Party,” Cornyn’s statement read.

Many conservatives openly discussed this “recalibration” of the GOP in frank terms in the week following the election. With the rapidly growing Latino demographic now in danger of belonging firmly in Democratic hands for a generation, Fox News’ Sean Hannity shockingly came out in favor of comprehensive immigration reform, otherwise known as the dreaded “amnesty” to most on his network.

Some conservatives also began to publicly reject the transparent voter suppression efforts of African-American voters this year in the form of strict voter ID laws and roadblocks to early voting in Florida and Ohio.

On the party’s alienation of women voters, perhaps the most direct was former George W. Bush adviser Karen Hughes, who said, “If another Republican man says anything about rape other than it is a horrific, violent crime, I want to personally cut out his tongue.”

While time will tell if Republicans adapt on social issues, there appears to be no budging when it comes to the prospect of raising taxes on the wealthy to avoid the fiscal cliff.

Early indications are that no such “recalibration” or “middle ground” will be sought here, as scores of Republicans have come forth in lockstep against Obama’s plan to keep the Bush-era tax rates for the lower 98 percent, while letting the tax rate go up for income over $250,000.

This past Sunday, McConnell flipped electoral logic on its head with this statement to The Wall Street Journal: “We have a voter mandate not to raise taxes.”

What McConnell and other Republicans suggest voters want is for tax rates for the wealthiest Americans to either remain the same, or preferably go down, while tax deductions and loopholes are lowered or eliminated.

If that tax strategy sounds familiar to you, it should. It’s the same policy that Mitt Romney just ran on, and was — if you believe the actual election results — rejected in favor of Obama’s plan.

So here we are again, just like the summer of 2011 showdown over raising the debt ceiling, which Mitch proudly compared to holding the economy hostage for a ransom. Now we have another Republican game of chicken as the American economy speeds toward the cliff.

And once again, Sen. McConnell has his hand on the wheel.

But there are other political actors in the car with him this time who could either force McConnell’s hand, or perhaps strengthen it, including his Republican colleagues in D.C. and folks back home in Kentucky.

Over the past year, there has been only one powerful voice among the Democratic establishment here in Kentucky that has consistently and publicly called out McConnell’s transgressions: Louisville Congressman John Yarmuth.

After a year of unrequited needling by Yarmuth — most notably over McConnell’s public falsehoods about the Affordable Care Act — McConnell finally took the bait the day after the election, responding to Yarmuth’s victory speech that proclaimed defeating McConnell in 2014 would be one of his top priorities over the next two years.

McConnell campaign spokesman Jesse Benton said that Yarmuth “seems to have an unhealthy obsession with Sen. McConnell,” warning that he would welcome crushing Yarmuth if he dared to run against him in 2014.

Yarmuth tells LEO that he interprets McConnell’s immediate reaction as an indication that he is already in full re-election mode.

One could argue that McConnell’s re-election mode actually started two years ago, though his efforts weren’t focused on a 2014 Democratic challenger. Instead, McConnell has moved swiftly to the right in order to fend off any potential Tea Party challenge in a Republican primary, a fate that many of his establishment GOP colleagues have suffered in recent years.

Yarmuth tells LEO that McConnell’s public statements since the election show he is not likely to be among those in his party seeking bipartisan “recalibration,” especially since Kentucky overwhelmingly defeated an unpopular Obama here at home.

But Yarmuth adds that even if McConnell’s votes and rhetoric don’t change, his fellow Republican senators might no longer follow McConnell’s obstructionist orders in lockstep, particularly when it comes to tax increases.

“He might hold his position but not hold his conference to the same regimentation,” Yarmuth says. “So he could maintain his purity on that issue if he wanted to and still allow (tax increases) to happen. It’s really more important what he does with the other 44 Republicans in the Senate than what he does personally.”

While Yarmuth appears unlikely to challenge McConnell in 2014, speculation is immediately ramping up on what Democratic challenger will step into the ring with him.

Yarmuth is actively touting the possibility that actress and unofficial Kentucky ambassador Ashley Judd could take on McConnell, using her universal name recognition and potential to raise large amounts of campaign cash in order to give him a run for his money.

Though Yarmuth says Judd would provide “a very stark generational contrast” to the five-term senator, it’s also true that such a candidacy would have its weaknesses, as she is an outspoken, liberal Obama supporter (especially on Kentucky’s third rail of coal mining) and currently resides in Tennessee.

While other names familiar to Louisville have been thrown around as potential challengers — like Jerry Abramson, Matthew Barzun and Greg Fischer — the most serious talk outside of Judd has been Kentucky Secretary of State Alison Lundergan Grimes, who would benefit from her father’s old Democratic network around the state, her lack of voting history that McConnell could attack, and her hyperactive ambition.

But Yarmuth warns that much of the Democratic establishment in Kentucky might decide to give McConnell a pass in 2014 — especially an overtly left-of-center challenge — seeing the statewide constitutional races the following year and fearing that an aggressive push against a candidate as dangerous as McConnell might harm their chances if things don’t go Democrats’ way.

Perhaps the most formidable high-profile challengers, Gov. Steve Beshear and former state auditor Crit Luallen, have announced they will not run, which is why Yarmuth is so gung ho about the chance of Judd running.

“That’s why I think someone like Ashley Judd represents such a great opportunity, because she really can exist outside of any apparatus,” Yarmuth says.

Ultimately, the strength of McConnell’s Democratic challenger could have a direct impact on how much he chooses to cooperate with Democrats in Washington.

But without any heat coming from back home — nor survivalist independence from his GOP colleagues in Washington — McConnell’s filibuster machine seems unlikely to cool off any time soon.

You win some, you lose some: A roundup of Election Day 2012 results