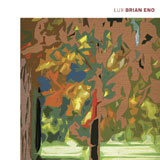 Trying to describe Lux is as circular as the music contained therein. I could use words like “ephemeral” or call it a “soundcloud.” I could compare it to other works like Music For Airports or Thursday Afternoon, as so many others have. The problem is that Eno doesn’t make ambient music, he is ambient music; any attempt to explain Lux only circles back to all things ambient, which, again, are all things Eno. Designed for an art installation played in the Palace of Venaria, Lux succeeds in its task as a serene rejoinder, the sonic equivalent to the artwork it was designed to accompany. Lux succeeds as Eno’s other works have, as an art form that works both on the periphery of your attention and as a piece of stand-alone art, itself a testament to contemplation and tranquility.