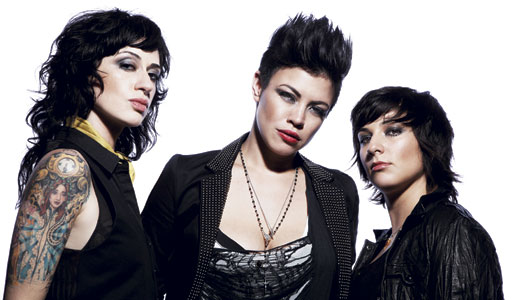 The lesbian phone tree has been abuzz ever since word got out that Hunter Valentine was passing through town. The ladies of the band — lead singer and guitarist Kiyomi McCloskey, drummer Laura Petracca and bassist Veronica “Vero” Sanchez — were key personalities on this season’s “The Real L Word” on Showtime, a reality show that revolves around, well, lesbians and their drama. Since forming eight years ago in Toronto, Hunter Valentine has gained a member (Vero), relocated to Brooklyn, and has three full-length albums under its silver-spiked black leather belt. They’re now on tour promoting Collide & Conquer, which was released in October, and they’re stopping by ZaZoo’s tonight. LEO got a few minutes with Petracca.

LEO: I’m guessing you’ve encountered some crazy fans on this six-week tour?
Laura Petracca: Tons! I’ve had random tongues in my mouth, random hands down my pants. Someone threw a yellow glove at me, a bra was thrown. Someone gave me a shoe … not really sure why. Just interesting articles of clothing on stage.

LEO: What’s your favorite song on Collide and Conquer to play live?
LP: Right now we’re only playing about six of them, but I would say “Liar, Liar” is one of my favorites.

LEO: What’s the band’s songwriting process like?
LP: For this album, it was different because we had new writers. Vero Sanchez joined the band last year, so she was a major writer on this album. And we had Somer Bingham collaborate on some of the songs. Vero, Kiyomi and I basically locked ourselves in a rehearsal space and put our ideas out, and then we picked the strongest songs and shaped them.

LEO: Are you happy with your decision to be on “The Real L Word”?
LP: Oh yeah, absolutely. We’ve always done well in the bigger cities, but we’re finding now that in a lot of cities we’ve never been to — in Florida especially, or venues where we could only get 100 people out — there’s definitely been a larger turnout. Last night in Austin we had almost 400 people, and the last time there was probably 150. So those kinds of things are happening now. People who are fans of the show became fans of the band, so they’re coming out to see us. It’s definitely given us more exposure, and we’re happy we did it.

LEO: Do you think it helped or hurt your image as a rock band?
LP: It definitely helped. I think any publicity — whether it’s bad or good — always gets some sort of recognition. I don’t like bad publicity, and through watching the show, it didn’t really portray Kiyomi entirely accurately, because they only picked and chose what they wanted. They tried to make her look like an asshole in the beginning, and she’s really not that bad, you know? They sort of just edited together all her bad times.

LEO: Will you be involved in the next season?
LP: We’re still waiting to hear what’s happening. Word on the street is that they’re in communication with Showtime now. I have a very good feeling that if they pick it up another season, we’ll be in it.

LEO: Is Kiyomi still with Lauren?
LP: Oh yeah! Lauren’s been visiting on tour. She’s been doing appearances in the same cities we’ve been playing. We see her probably every other week. Being in a relationship and being in a touring band is almost impossible.

LEO: Who was your favorite character on the original “L Word”?
LP: Oh, I liked Carmen! Mainly ’cause she’s really attractive, and I liked her fire.