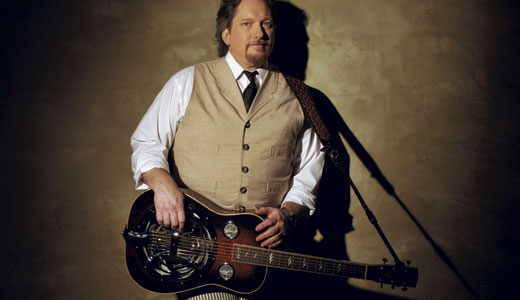 Jerry Douglas has made a lot of friends after 40 years in the music business. The 56-year-old, called the world’s greatest dobro (resonator guitar) player, has earned 13 Grammys after performing on something near 2,000 recordings, when he’s not at his day job as a pivotal member of Alison Krauss & Union Station.

The Nashville resident released Traveler, his 13th solo album, in June, his first with an outside producer and the first to feature his vocals. He also plays lap steel and slide guitar on it. The album features appearances by Eric Clapton, Dr. John, Keb Mo’, Marc Cohn, Sam Bush, Bela Fleck, Del McCoury — and on his cover of Paul Simon’s “The Boxer,” not just Simon himself, but also Mumford & Sons.

“Those guys have been friends of mine for a few years,” he says. “We’d been planning on recording together at some point.” He stayed over in London after a Union Station tour to record with the then-rising band. When he thought it was finished, Douglas played it for Simon. “He wanted to play on it, too! My band opened for him a few years ago, and every night, Paul and I would end the whole show with ‘The Boxer,’” Douglas says. “So it’s sort of a mish-mashed version of his version and Emmylou Harris’ version, I’d say. Because the Mumfords knew it from Emmylou.”

Simon approved but wanted the recording to end the way he’d ended it with Douglas onstage. The recording also appears on the deluxe edition of Mumford & Sons’ hugely popular Babel, released in September.

Douglas says he doesn’t care about how that might affect him financially. “It’s more about friendship than dollars and cents … it’s music.”

He’s seen the occasional windfall before, like when the O Brother, Where Art Thou? soundtrack sold millions a decade ago. “Everybody’s ready for something honest, and they certainly are that.”

It’s been “a long time,” he says, since he’s played a solo show in Louisville. (Union Station’s 2002 Live album was recorded at the Louisville Palace.) He used to come back every year for the IBMAs, the bluegrass awards, until they moved to Nashville. “It’s a fickle bunch,” he laments. “Nashville’s actually the perfect place, I think, but I think it’s too expensive for a lot of the folks … it’s country music, and a lot of them just don’t like the big city.”

When LEO spoke with Douglas in October, he was in the Florida panhandle vacationing with his family and celebrating his 25th wedding anniversary before starting his current tour, which brings his quartet to the KCD Theater this weekend. “I’m on the beach — I’m actually in the water!” he said, sounding like a man who’s figured out how to make even a work phone call obligation into something fun.

On his vacation, he’s discovered a band who play Sundays at a seafood joint on the beach. Even off the job, he can’t help but sit in with another band.

“It’s a really great place to retire and start an empire,” he notes.

So, in your mind, retiring also involves a chance to do more work?

“Yeah! I’ll just have a revolving band I can play with — play what I want to.”