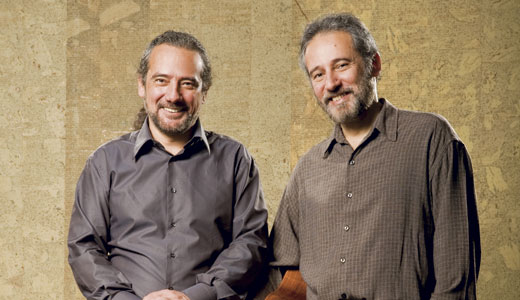 Brothers Sérgio and Odair Assad are guitarists, born in Brazil, but their music cannot be pigeonholed by their birthplace. Sérgio now lives and teaches in San Francisco, while Odair resides and teaches in Brussels. Jardim Abandonado (Abandoned Garden), released in 2007, is their most recent album, and it serves as a good introduction to the eclectic classicism of these artists, who perform pieces from composers ranging from Debussy to Gershwin, Milhaus to Jobim. Their guitars complement each other, neither brother trying to outplay the other, but rather embracing the music and making it their own.

They will be touring the United States and Brazil this month. The program for Friday’s Clifton Center performance covers more than three centuries of music, going back to the early 1700s for selections from Jean-Philippe Rameau’s “Pièces de Clavecin” (“Pieces for Harpsichord”). The first half of the concert will also include Fernando Sor’s “Fantasia, Op. 54” and will move into the modern era with pieces by the contemporary Brazilian musician and composer Egberto Gismonti.

The second half will be the thematic “Journey of the Brazilian Guitar Through History.” The pieces date to the early 20th century, including an arrangement of Ernesto Nazareth’s “Batuque,” and move to more contemporary composers, including Antonio Carlos Jobim and Baden Powell.

The brothers began learning guitar and playing together as children. Sérgio says playing music was “not our decision, because we started to play very early. My father played the mandolin and had such a passion for music. He did everything he could to put us with a teacher and have a career. It was more of his dream than ours. It became ours later, but when you’re a child, you don’t think that way; but we became a guitar duet as kids.”

Their father’s devotion to their music was such that when they were young, he took them to a teacher in Rio de Janeiro since they did not have a classical guitar teacher in their small hometown of São Paulo. They played for her, and she told them she would coach them through weekly lessons. Their father relocated the family to Rio so they could continue. “This was a brave gesture for him,” Sérgio says. “It turned out OK. We could have gone there and failed, but actually we progressed and achieved a career.”

The Assad Brothers have continued to expand their musical horizons, from the Brazilian and European classical music they learned as youngsters to exploration of their family’s Lebanese roots. In addition to arranging and performing, they also write music. Sérgio says that growing up in Brazil, they were aware of their multicultural family roots. However, it was a bit later that they began to explore those roots from a musical perspective.

They broadened their musical focus by playing with jazz musician Paquito D’Rivera and touring with a Lebanese singer and percussionist. “We started mixing some elements of Brazilian and Middle Eastern rhythms,” Sérgio says. “We combined them, like creating a new recipe.” Sérgio won a Latin Grammy for the composition “Tahhiyya Li Ossoulina” from Jardim Abandonado, which had been inspired by their ancestry.

Although Sérgio and Odair live continents apart, Sérgio says the distance is not a barrier. “We’ve been so busy playing, constantly traveling together. We spent a whole summer together, and now he’s coming here for the premiere of a concerto that my daughter Clarice wrote.”

He speaks of some of the pieces they will be performing on the upcoming tour. “The Well-Tempered Guitars” is a series from Italian composer Mario Castelnuovo-Tedesco, from which they will play two preludes and fugues in the first segment of the concert. They have prepared new arrangements for Brazilian guitar standards. He also notes that in the Brazilian section of the program, there will be room for improvising. They will feature the work of “Canhoto” (Américo Jacomino, aka “Lefty”), who Sérgio credits as being the musician who truly introduced the guitar to Brazil. “They used to play the music very darkly. We don’t play the music the way they played it then.”