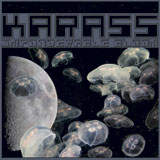 There’s something about the deliberate approach of most instrumental post-rock bands that is reminiscent of U2 guitarist The Edge. As the beginning chords of the opening track slowly begin to reveal themselves, stealthily approaching from some unseen vista far, far away, the clean, stuttering tone becomes engorged on the structure of all the rock music that’s come before it. The riffs become massive as the rest of the band — always a bassist, drummer and either a keyboardist and/or another guitarist — announce themselves to the world, wet as an otter. Those that don’t vary from the format don’t survive, roadkill, while the best — like Karass — turn the formula on its head, transmogrifying from the expected model to an interstellar, post-John Carpenter soundtrack immersion. Also, no Bono, often a bonus.