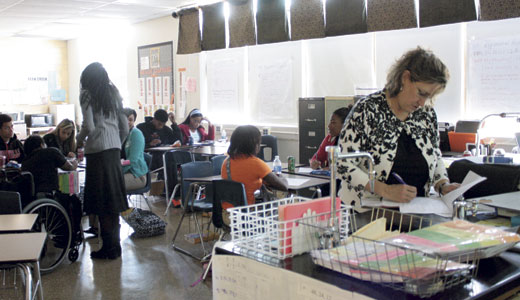 At Fern Creek High School, 2:20 unfolds in predictable sequence: bells ring; a chattering surge of 1,300 students dressed in the school’s orange and black press through doors into the parking lot; cars snake under a white arc that reads “To Proficiency and Beyond” to collect teenage cargo.

On a recent cold, misty Tuesday afternoon, bundled bodies hustle, a trail of fogged breath in their path. Meanwhile, teachers pile into the library for a faculty meeting, a rarity at Fern Creek. Principal Houston Barber nixed these institutions of teaching life a few years ago. The move coincided with a massive turnaround effort in the wake of being labeled a “persistently low-achieving school,” or PLA, by the Kentucky Department of Education. Now teachers spend after-school time digging through student test data and swapping ideas on how to improve lesson plans.

“Punch and cake! Woot!” a female teacher proclaims upon spotting a white sheet cake and an army of Styrofoam cups filled with sherbet punch.

Primarily, the gathering is to honor a retiring French teacher. But first, Barber, an easygoing thirty-something, clicks on a microphone for an announcement. Dressed in a dark suit and orange tie, he paces back and forth a few steps.

“They’re going to be announcing test scores on Friday,” he says, referring to the much-delayed release of Kentucky’s new public school assessments.

“We have made some great gains,” he pauses. “While I can’t say the exact scores … U.S. History … they pretty much destroyed not only the state average, but the district average.”

Applause erupts. Sara Wilson, a young history teacher whose dark hair is pulled into a bun, raises her arms in a “V” for victory. Relief envelops her fellow history teachers all clustered at a table. They’d heard rumors that Fern Creek fared well, despite months of dire predictions that the tougher tests and standards would yield poor scores. Barber continues.

Peggy Preston, an algebra teacher in her fourth year at Fern Creek, smiles at the news.

“I was very anxious,” she says, a plate of cake crumbs nearby.

A sense of vindication pulses throughout the room. Barber alerts his staff that a TV crew may be stopping by on Friday to profile Fern Creek as one of the district’s bright spots, a welcome turn from their tumble through the news cycle a little over two years ago.

With this low-performing designation came extra manpower from the state, $1.3 million in federal funds, and a staff overhaul. Twenty-nine teachers either left voluntarily or involuntarily. The failure label, be it fair or not, stuck.

In the coming days, specifics will emerge about Fern Creek’s latest test results. They’ll dull today’s glowing report a bit. But Barber and his staff believe momentum is on their side.

He clicks to a page that shows his school’s overall score — 50.4, just below the district’s score as a whole, 50.8. Under the new accountability system, each school and district receive a score from 1-100 based on a number of factors. In high schools, 20 points are available in five categories: achievement, college and career readiness, growth, graduation rates and something dubbed “gap” scores. These involve test scores for populations that have traditionally shown a gap in achievement when compared to white, well-off students: minority, low-income, disabled and English language learners.

Next to Fern Creek’s score sits its percentile rank among Kentucky’s public schools — 26th. Barber knows this standing may not impress, but for a school that just two years ago was ranked as one of the worst in the state, he feels it’s marked improvement.

Many of his fellow 17 PLA schools, now called “priority” schools, continue to linger in the 1st, 2nd or 3rd percentile.

As Barber reviews the data, he points out that from 2010 to 2011, the school made strides. While federal benchmarks weren’t met, the percentage of all students proficient in math grew by more than 20 percentage points and about 10 percentage points in reading. Graduation rates also rose.

But, he says, it’s hard to compare this year’s scores to previous years due to the switch to new, tougher standards known as Common Core. Kentucky was the first of 46 states to adopt the national standards.

Across the district, more than 100 of 136 JCPS schools were labeled as needing improvement or sitting below 70th percentile for performance. Fern Creek was one of them. Reading, writing and math scores dropped by up to 20 percentage points. Other schools suffered even more dramatic declines. But, again, being that the tests and even grade levels assessed changed, it’s hard to make a fair comparison.

Barber reviews Fern Creek’s gap scores and sees that in some subjects white students outperform African-Americans by 2-1. It bothers him. “That’s a problem in the district as a whole,” he says.

On the plus side, the percentage of kids deemed “college and career ready” grew from 26 percent last year to 37.5 percent. And while he doesn’t feel comfortable naming the schools Fern Creek has surpassed, data shows his school now ranks higher than regional competitors. (Hint: They rhyme with Heffersontown and Smeneca.)

It’s impossible not to be competitive when the whole system creates a tiered structure of powerhouses, underdogs and in-betweens. Not surprisingly, even with all the testing changes, strong magnet schools like duPont Manual and Louisville Male high schools ranked tops in the state.

But overall, Barber approves of the new accountability system.

“I think it’s much more comprehensive,” he says. “I think it tells a lot more of the story of a school.”

He likes that schools earn points for growth, and that schools are now accountable for getting kids ready for life after 12th grade.

Part of Barber’s vision includes retaining students, making sure they stick it out all four years at Fern Creek. He’s beefed up opportunities for kids interested in the school’s four magnet programs: visual and performing arts, media and communications, analytical and applied sciences, and leaderships and social sciences.

Two framed, poster-sized pages from 2010 and 2012 state audits hang in the main office. Colorful pie charts illustrate how the school has measured up in areas like school culture and curriculum. While a brick red hue fills slices of pies from 2010, navy blue and black comprise the 2012 pies, a sign of improvement in just two years.

Also on the second floor, once the last bell rings, struggling students grab a bag of chips, a soda, a TARC ticket to get home, and an assignment to a particular room for an hour of instruction on a subject they’re not grasping.

On a recent Wednesday, the topic in room 221 has algebra teacher Peggy Preston hop-scotching from student to student explaining the intricacies of rewriting exponential expressions into rational expressions.

Fern Creek administrators do not want to remain near the 26th percentile when next year’s test results come out. Enter the “Data War Room,” a former VHS tape storage area encased by muted yellow concrete block walls. In the days before test scores were officially released, even with the whispers that Fern Creek might have some good news headed their way, the war room shut its doors, abandoning positive spin for objective truth.

As the clock hits 10:30 a.m. on a recent Monday morning, Barber joins assistant principals, a resource teacher and other staff in the data war room around a long conference table. Two Pepsis pop open. The meeting begins.

One by one, each reports what they’ve witnessed in classrooms:

“So chaotic, out of control.”

“I noticed, during the class, three kids with their heads down, lots of kids with heads in hands … really limited engagement.”

“These are our seniors walking out into the real world in 134 days, and they can’t do seventh grade math.”

“Amazing culture in her classroom. (Students) would hand out their livers to her if she asked them to.”

Every week, he assigns this group a team of teachers, based on subject, to observe. These sessions aren’t meant to bash teachers, but rather identify weaknesses and try to offer support.

Some veterans have cringed at the constant oversight, viewing it as a knock on their pedagogical principles. Others welcome the help.

“They’re in you’re room a lot, but they give you feedback,” says Laurilee Neutz, a math teacher. “And for me, that’s encouraging.”

After all, teachers shoulder a lot of demands. Not only must they teach a standard once, but also every time a student doesn’t understand that lesson, they’re expected to reformat their instruction and try again until that student learns. That’s where professional learning communities (PLCs) have proven valuable. Each week teachers collaborate on ways to effectively convey a lesson.

PLCs, now a staple in Jefferson County schools, may seem intuitive. Why weren’t teachers working together in the past? By all accounts, teachers have always chatted and shared lesson plans, it just wasn’t formalized.

Now it’s built into the day.

“It doesn’t make you a superstar,” says Rebecca Nicolas, an assistant principal who staffs the war room. “I think teaching is still a gift for a lot of people who are really, really talented. But it takes teachers who are struggling … and makes them competent.”

Nicolas could hold the title of war room wizard. The energetic former English teacher, along with four other staff members, spend their days collecting, assessing and analyzing student performance.

She regularly provides teachers with data showing how students fared on tests throughout the year. Red, yellow and green charts indicate which students did well (green), average (yellow) or poorly (red). Bar graphs with the same color palette show how students manage on individual questions. (For example, on a biomolecule question, 66 biology students failed, 92 sort of grasped it, 51 got it right.)

Josh Lowery says this bridges the divide of what teachers believe they’re achieving and what minds actually soak in.

“Everybody gives the test and they have this idea of what their classroom is like and what their kids know,” he says. “But when you get those cold, hard facts back and it’s not what you thought … how do you explain that?”

Within the war room, Fern Creek has established an Office of Teacher Support, a veritable outlet mall of ideas for bettering instruction and performance. Bulletin boards grip dozens of goals for teachers, like requiring they watch their co-workers in the classroom. A white board lists the names of students who just barely fall below proficient in certain subjects. Strategically, nudging this group forward will pay off.

The federal funds Fern Creek received when deemed a PLA helped establish this office, but Barber says he’s rearranged staff so that, financially, it should sustain once the money runs dry next year.

“What they understand is that the key is building teaching capacity for long-term, sustainable change,” he says.

Back at his office, clicking through the online report card, Barber admits that Fern Creek has a ways to go. With a new baseline set, he knows the school must move forward or face another round of scrutiny. But he’s confident that in time, with a few more points in each of the five categories, Fern Creek will climb the ranks, settling into the coveted 70th percentile or above. In thinking about it, he refers to his beloved Fighting Irish football team.

“Notre Dame, they’re playing pretty phenomenal right now. The play calling that they’re having has been successful. And we feel like our play calling is working,” he says. “We still have a lot of ways we can get better. But we’re making great strides.”