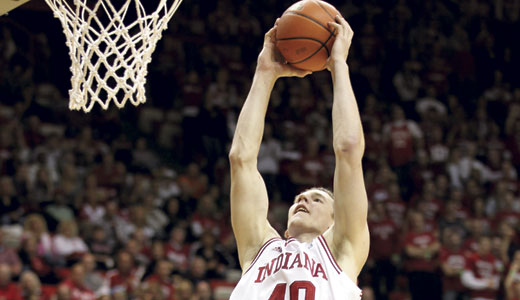 Julia Meek knows exactly where she was when Christian Watford sank the dramatic three-pointer that lifted Indiana to a 73-72 upset of No. 1 ranked Kentucky last December: She was there!

And she was one of the thousands of IU fans who poured out of the stands onto the Assembly Hall court for one of the most spontaneous eruptions of basketball joy in years. Nobody planned it. Or probably even thought about it beforehand. But when Watford hit the shot, down went Kentucky — and out of the stands they came.

Thousands of them. Cream and Crimson.

ESPN’s Fran Fraschilla and Bob Valvano were still buzzing about the celebration the next week, amazed with the notion of tradition-steeped Indiana fans rushing onto the floor.

“Guess they’ve had it pent up for so long, they needed to get that out of their system,” laughed Fraschilla. “Now they can get back to being Indiana.”

Indiana fan J.D. Lewis, who dates to the Branch McCracken era of Hurryin’ Hoosier basketball, admits he was thrilled, though just a bit embarrassed by the loss of decorum. “It’s not like Indiana has never known success,” Lewis says. “Act like you’ve been there.”

Fiddlesticks, says Meek. She was there.

“Christian Watford’s shot in the last seconds, it was just unlike anything I’ve ever experienced,” says Meek, an IU senior last year. “Assembly Hall in a crazy wave of excitement. An instantaneous wave. Then people rushing to the floor. It was absolutely amazing.”

There were thousands celebrating, including John Mellencamp, who summed up the moment, “We’re back, baby!”

And, indeed, Indiana was back. Or at least well on its way. Back from years of basketball poverty that included an embarrassing probation. The reprimand was brought on by a previous coach, Kelvin Sampson, who broke a recruiting rule, got caught, then did it again. Like something you’d see at … oh, never mind. It was the first NCAA basketball violation in Indiana history. And a humbling humiliation for a school that values its reputation enough that it once fired its most successful coach, Bobby Knight, for being a boor.

A new coach, Tom Crean, was hired to clean up the mess and restore tradition (winning). No small task. Crean won only six games his first season. In his first three years, Indiana won just eight games in the Big Ten.

Then came the breakthrough last year. Not only did the Hoosiers beat Kentucky, but also Big Ten kingpins Ohio State and Michigan State, and they led the nation in three-point shooting. Eventual champion Kentucky beat Indiana 102-90 in the NCAA Tournament. But in every town across Indiana, Hoosier fans swelled up and looked ahead.

Now, Indiana begins a new season ranked No. 1 in the AP poll, with nearly everybody back from the breakthrough year, including All-American center Cody Zeller.

Which brings us to the point of this story: What now?

Can Indiana march right along to its sixth national championship? Is it really better than No. 2 Louisville or No. 3 Kentucky? Or Syracuse or North Carolina?

One interesting facet of this first AP poll is the top 14 ranked teams have all previously won a national championship. In fact, 10 of the top 14 have won at least two! And between them, Indiana, Louisville and Kentucky have won 15 times! Looks like a big year for the traditional powers.

Lewis, a sportswriter out of Salem, Ind., by way of The Columbus Republic and The Courier-Journal, makes a realistic evaluation, beginning with that No. 1 ranking.

“Everybody plays cupcakes at the start of the season, but I think the Big Ten is going to be pretty tough,” Lewis says. “Ohio State and Michigan are ranked fourth and fifth, and Wisconsin and Michigan State are in the top 25. Indiana will probably have six or seven losses. So they’re not going to be No. 1 heading into the tournament.

“And,” he cautions, “Indiana is going to have to improve its defense. You’ve got to have a great defense to win the NCAA.”

But there’s no discounting Indiana’s talent. Starting with Zeller.

“This might be over the top, but Zeller reminds me a lot of Bill Walton — and I know that’s saying a lot,” Lewis says, comparing the sophomore power forward to the UCLA basketball legend. “He’s very flexible, very coordinated, a great passer, gets the ball out on the fast break and runs the floor. And right now, you know, Cody is projected to be the No.1 NBA draft pick, so this might be Indiana’s only chance with him to win a championship.”

Indiana has plenty of talent to go with Zeller, but Lewis tabs Victor Oladipo for a special role: the less heralded guy who makes the unexpected big plays.

“Indiana hasn’t seen anybody like Victor Oladipo,” Lewis says. “And I don’t know if he’s a future Dwayne Wade (the Miami Heat star Crean coached at Marquette), or anything even close to that. But I’ll bet Crean has in his mind that Victor is a talent.”

And then there’s the IU thing. The school, the games, Cream and Crimson. You won’t see any neon uniforms. The band plays during timeouts, instead of giant amplifiers blasting a wall of commercials. Indiana prides itself that it sells more seats to students than any other school, nearly 8,000 per game.

And from the moment she walked on campus, Julia Meek embraced the game. Now she’s sneaking a peak toward the tourney.

“I don’t care if Louisville and Kentucky battle it out for second,” Meek says. “I wouldn’t want to start off with Kentucky, there’d be so much hype surrounding that game. But by the time we see Kentucky (along in the tourney), we’ll be ready. The main thing is to get back the program, establish that we are Indiana basketball.”

And is a championship a part of that?

The opinion of this scribe: It might happen. Indiana has the star shooters, plus an All-American center.

Now we’ll find out if this is a team that finds its time. Gets it all rolling. The fans. That feeling. A stupid, catchy nickname. All that’s very powerful in college basketball.