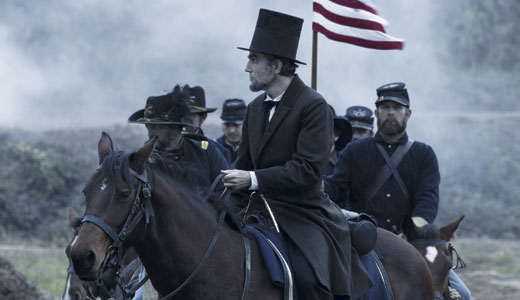 There is no question that from this point forward, Daniel Day-Lewis’ Abraham Lincoln will be considered the definitive portrayal by which all others will be measured. Day-Lewis is known for immersing himself in his characters, and “Lincoln” is the latest in a line of successful transformations. He does not disappoint as we see him spinning his folksy tales and captivating those who come in contact with the living legend.

“Lincoln” does not attempt to capture the president’s entire life. Instead, it focuses on the final four months of his administration as he struggles to conclude the Civil War and cement the concept of permanent freedom for slaves that he’d introduced with his Emancipation Proclamation. For Lincoln, the key to that is passage of the 13th Amendment to the U.S. Constitution, abolishing slavery.

Day-Lewis is surrounded by a great cast, including Sally Field as Mary Todd Lincoln, Tommy Lee Jones as Rep. Thaddeus Stevens, David Strathairn as Secretary of State William Seward, Hal Holbrook as Francis Preston Blair, James Spader as W.N. Bilbo, and Joseph Gordon-Levitt as Robert Lincoln, although Gordon-Levitt is given little to do. All of the actors deliver strong performances, no small feat when compared to Day-Lewis’ embodiment of the larger-than-life 16th president.

Pulitzer Prize-winning playwright Tony Kushner’s script moves deftly, depicting Lincoln as a family man, an inspiring public figure and a politician. The last role is the most revealing, as Lincoln must keep his fellow Republicans in line while trying to sway reluctant members of the Democratic Party to join the abolition effort.

President Lincoln seems quite willing to engage in the sort of partisan politics considered commonplace today. He needs a supermajority of the vote to pass the 13th Amendment; even if all the Republicans are kept in the fold, he still needs 20 Democrats for it to pass. Lincoln orders Seward to bring in “men from Albany,” skilled in buying political votes, to offer patronage jobs to Democrats who lost in the November election and would be jobless in March.

While backroom deals have been standard for decades, watching Lincoln behave like a typical modern-day politician is unexpected. The core conflict of the movie is the political finagling involved in trying to pass the amendment. Lincoln struggles to take the vote to the floor at just the right time; this involves bringing in a team of Southern peace ambassadors to assuage one Republican faction, while keeping those ambassadors out of Washington until he can engineer the vote. Many of the film’s fiery moments occur on the House floor, as members engage in slavery debates that include humorous commentary aimed at the other party. Although the film’s title is “Lincoln,” he’s absent in some of the best scenes.

“Lincoln” is well-acted, well-written and strongly directed by Steven Spielberg. Day-Lewis will undoubtedly earn an Academy Award nomination and might be the frontrunner for Best Actor. Nominations also are likely for Jones, Field, Kushner and Spielberg, and the film will probably grab several other Oscar nods, since it’s also exquisitely presented in such details as the period costumes and set design.

Despite all these superlatives, it seems it may have been produced more to win Oscars than to entertain. It drags in spots, checking in at almost two-and-a-half hours, and even the most ardent fans may want these 19th-century politicians to stop mucking around and just get on with it.