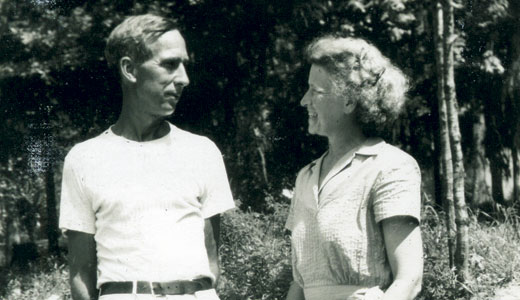 A documentarian is reviving interest in the life story of Harlan and Anna Hubbard, who found a personally satisfying balance with the natural world while living a deliberately simplistic life along the Ohio River’s banks.

Morgan Atkinson’s career includes making films about Thomas Merton (“Soul Searching”) and Louisville musical icon Tim Krekel (“Live Music”), as well as the social activist and “Black Like Me” author John Howard Griffin (“Uncommon Vision”). Atkinson had just a glancing recognition of the Hubbards, who began to take their life in a unique direction when they floated their handmade boat from Cincinnati to New Orleans in the ’40s. In later decades, the Hubbards lived on gardening and whatever gifts the Ohio River would bring within their reach, as Harlan became a noted painter and writer.

Atkinson’s interest in the couple began suddenly, he tells LEO. “One night I had a very vivid dream about Harlan Hubbard. I can’t even recall what the specifics were, but I woke up and laughed to myself.” The filmmaker began to research, and the first book he opened was “Harlan Hubbard: His Life and Work,” a much-praised volume by Hubbard’s good friend Wendell Berry.

Berry is just one of the prominent Kentuckians who contributes to Atkinson’s finished work, which is entitled “Wonder” and will be premiering Monday at the Clifton Center. Musician-actor Will Oldham is heard as the voice of Harlan Hubbard in journal readings. Ben Sollee’s music is on the soundtrack.

Once Atkinson had his strange epiphany about the Hubbards, he began the process to get a documentary film made — a process he knows well. “The things that make it possible are, ‘Are there sources that can help bring this story to life?’ Meaning archival sources, photographs, things of that nature … and ‘Is it possible to get funding?’ … and ‘Am I really interested?’ As time went on, I got affirmative answers to all three.” The online crowd-sourcing site Kickstarter served as one mode of funding.

The filmmaker seemed to surprise himself in finding parallels between the Hubbards and Thomas Merton. The intentionally hardscrabble life of the couple could be seen, Atkinson says, as “a very spiritual and mindful life. To me, that was interesting — how a person could do that without conventional religion… This may be a stretch, but monasteries are places where people go to find refreshment, to find nurture or some meaning in their lives. Visitors would go to (the Hubbards’) home with this intention in mind. It’s not like the Hubbards were gurus — but without advertising themselves as such, people came to them thinking, ‘These people were in touch with a better way to live their lives.’”

Atkinson’s not at all sorry about living his own life by following dreams, much as he did with making “Wonder.” He sees his subjects in the same light: “Tim (Krekel)’s dream was to create great music. In Thomas Merton, the dream was the union with the Divine. You examine what people’s dreams are, and how they try to realize them. With the Hubbards, their dream was to live in a self-sufficient way so that they could be as locked in with nature as possible. And to be answerable to nature as much as possible.”