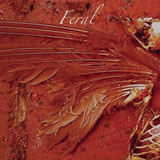 Focusing equally on vocal harmony and distorted guitar/bass riffage, Feral is an accurate descriptor for a band as liable to charm as they are to attack. And attack they do, and do well. Clocking in at approximately 20 minutes, Feral is a concise effort that seldom has an interest in slowing down or lingering, trading longer compositions for short and muscular ’90s-era rockers that aren’t afraid to bare their teeth when cornered. From the surf guitar of opener “Hard Tears” to the blues-punk of “Dead Weight” and “Livin’ Underground,” the through line here is pop-inflected indie music, which relies as much on the vocal interplay of guitarist Tara Kimes and bassist Miranda Cason as it does on distorted guitars. As such, Feral succeeds as a testament to the struggle between expectation and desire.