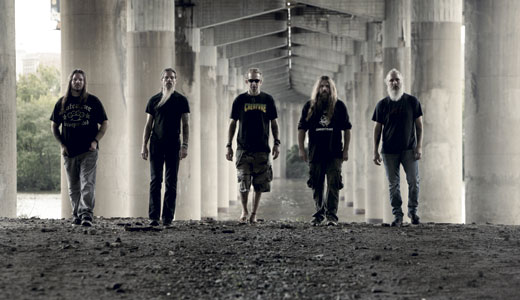 It was a hellish summer for Lamb of God. What was to be a triumphant tour of Prague resulted in singer Randy Blythe spending five weeks in a Czech Republic prison, jailed on suspicion of manslaughter. The incident had occurred in that country two years earlier when a fan, thrown off stage, died. After posting bail, Blythe was released. He returned to the United States in August and is waiting to be brought up on charges.

Blythe’s woes aside, any conversation with drummer Chris Adler, who used to be an IT tech before quitting his job, settles on the topic of technology. Here’s a guy from Richmond, Va., who joined Lamb of God in ’94 when metal was on the ropes. Adler watched grunge, rap-rock and nü metal rise and fall. He saw Napster peeve Metallica, then perish. Now Adler is witnessing a metal explosion on the Internet — torrented, sure, but much of it legally purchased and shared, too. Adler loves it.

Still, through all the innovations and changes, Lamb of God sticks to its original recipe: to make the best, most aggressive music. And replicate it onstage.

“Technology allows musicians to go further than ever before,” Adler says. “We grew up on bands like Metallica and took that idea and made it our own. Because of digital technology, music becomes more aggressive, almost like a multiplier effect.”

Indeed, as shred-minded musicians hone their chops with recording software on a laptop, the results are increasingly intense, extreme, progressive. Still, it’s the live setting, insists Adler, that tests a metal band’s mettle.

“Playing on your computer is one thing, and I hear some incredible studio projects,” Adler says. “But if you can’t play it onstage, you’re not that great.”

That said, technology, especially in the studio, means Adler doesn’t have to nail the perfect performance the first time. He can choose from a series of different takes, different drum fills, to arrive at an ideal track.

“I’m far less rigid in the studio now,” he confesses. “On early records, I’d force myself to memorize everything. We were recording to old-school tape, and we had three hours to do three songs. Today it’s more liberating to digitally lay down 20 cuts in 20 minutes and consider them all. I’m more energetic, less deliberate. Basically, we use technology to enhance our music, not obscure weaknesses.”

You hear that energy in Lamb of God’s most recent album, Resolution, released early this year. From the airtight groove-metal riffs in “Desolation” to the acoustic-blues intro of “Ghost Walking,” which saunters into a swinging electric riff before going industrial for a moment, Resolution is never complacent.

The energy transfers to the stage. Lamb of God started out hard on themselves, videotaping every show, finding mistakes in production elements. The band sees shows as being just as important as their music.

“When people see us, they want us to play well — as good as the albums, if not better. And they want a show. No spaceships, lasers or (Iron Maiden mascot) Eddie. I won’t give it away, but know that, for us, it’ll be a big production.”

So does the Lamb love Louisville?

“The rowdiest bunch of people there,” Adler says. “Louisville’s an insane crowd.”

Lamb of God with In Flames, Hatebreed, and Sylosis