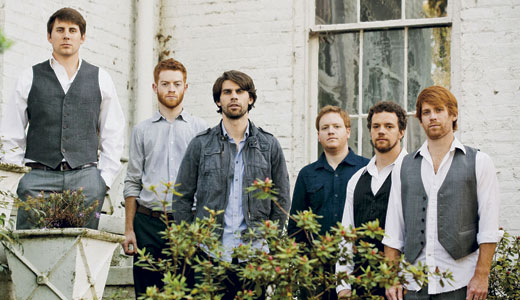 Oftentimes, the ability to succeed as a musician just feels like a lucky roll of the dice. If this is the case, someone needs to get roots-rock six-piece The Dirty Guv’nahs to Vegas, because 2012 has definitely been their year.

The Knoxville band released their third and latest record, Somewhere Beneath These Southern Skies, this past August, with help from their new Nashville label deal with Dualtone, but mostly from fans, with the band’s fundraising Kickstarter campaign.

“We used Kickstarter and raised over $30,000. It was just amazing,” gushes lead singer and songwriter James Trimble. “It was a real eye-opener and a really strong validation for our band … we ended up raising the initial $20,000 in three days!”

Once they were in the Nashville studio, recording with Richie Biggs, the band got to work incorporating new things they have learned since their last record.

“I think this one has a little bit more modern-sounding rock,” Trimble explains. “It’s a roots-rock record, but we definitely spent more time in the studio, and we’ve been touring for a long time now, so there are just new tricks you learn — every year you learn something new, and when you get back in the studio, it gives you a chance to try out some of those new ideas. I think this album is a concise collection of music, but we’re still growing every day.”

Their ability to create a modern feel with a traditional Southern rock sound is not luck, but the product of lots of hard work. Lyrically, Trimble reached out to people he knew for inspiration.

“This album came from a lot of different places, but there are a lot of stories from friends of mine,” Trimble says. “I actually did a handful of interviews with them to help write songs. I just asked people about their stories of heartbreak or trouble; I even included a family member on one of them. And also, there is a song on there called ‘Temptation’ that is just about the struggles of the band, trying to balance creativity with trying to make a living off of playing music.”

The band also recently received an ambassadorship from Martin Guitars that equips them with the instruments they need to both rock out and record. During a stop on their current tour, the band got to check out the Martin Guitar factory in Pennsylvania.

“We saw everything from the initial wood selection process to the final buffing on the finish of a guitar,” Trimble says. “It was very cool to see.”

The band has also had songs featured on the CBS crime drama “Criminal Minds” and ABC’s new nighttime soap “Nashville.” With the momentum The Dirty Guv’nahs are quickly gaining, it’s funny to look back at the beginnings of the band and think of the friend who encouraged them to start in the first place.

“When we were all in college, we had a mutual friend who was really encouraging us to put together a band,” Trimble says. “There were three or four of us living in that house, and The Guv’nah was also living there. He just really encouraged us to start a band, and he also brought in other people that ended up rounding out our six-piece, but the only person we knew in common was The Guv’nah. And since he was non-musical and wasn’t going to be in our band, we decided to name it after him.”

with Thirty Spokes and Iron Bells