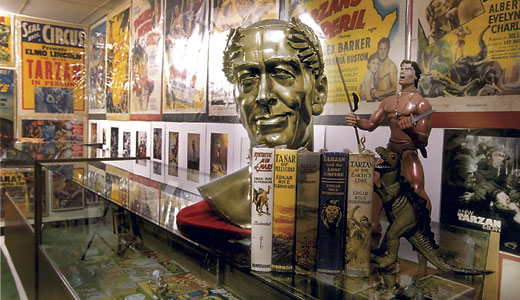 He swung from trees, raised by great apes in the jungles of Africa. He delivered his now famous yodel call and — if the many film depictions of this fictional character are representative — wore a loin cloth to conceal his junk.

And this year, Tarzan turned 100 with a special birthday bash Oct. 28 at the University of Louisville’s Ekstrom Library, which houses the Burroughs Memorial Collection, the world’s largest institutional collection of Edgar Rice Burroughs relics and Tarzan memorabilia, donated by curator George T. McWhorter.

Delinda Stephens Buie, head of special collections at Ekstrom, describes the collection — which is on public display through Dec. 15 — as being “filled with treasures.”

Among some of the 200,000-plus artifacts are hundreds of film stills, Burroughs’ cape from when he attended military boarding school, vintage posters depicting the 22 actors who portrayed the iconic Tarzan character across the decades, toys, promotional items, and even a pair of Johnny Weissmuller’s swimming trunks. Weissmuller was, of course, an Olympic swimmer who is perhaps the best-known big-screen Tarzan, having made a dozen movies during the character’s heyday in the 1930s-40s.

The iconic character is so universal and enduring, Buie notes, that even scholars look to it for reference. “Just this past August, we had a doctoral student from Trinity College Dublin here for two weeks, researching Burroughs’ references to science and scientists in his Tarzan books,” she says.

While best known for creating Tarzan, Burroughs also wrote science fiction featuring his character John Carter, a Mars adventurer, as well as a Venus series and the seminal “The Land That Time Forgot,” a sort of predecessor to “Jurassic Park” that was given a film treatment in 1975.

Buie says of all the items in the collection, her favorites by far are those to which the author added a personal touch. She describes having special affection for “Tarzan books inscribed, with whimsical illustrations, by Edgar Rice Burroughs to his children. Several of these currently are on display. They give us a glimpse into the playful, imaginative man — and affectionate father — who created whole worlds in the jungle, in ‘Pellucidar’ (his book series about a land beneath the Earth’s core), in the ‘Wild West’ and on Mars.”

Regular weekday viewing hours will be held through Dec. 15, but Buie says the collection can be viewed by appointment as well. Admission is free. Also, an international meeting known as the Dum Dum (which is named after Burroughs’ description of the assembly of apes in the jungle) will be held in Louisville next August.