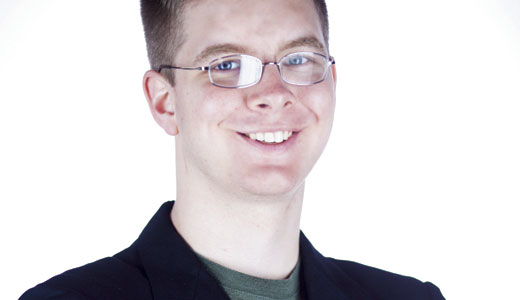 Born and raised in Louisville, Jacob Williams moved to Chicago after college to pursue comedy. With a résumé that has had him performing on Showtime specials with Pauly Shore and Nick Cannon, Williams’ profile got higher this summer when he made it onto “America’s Got Talent.” Williams returns this week to headline at The Bard’s Town, his first big show in his hometown. He found time to catch up with us even with his increasingly busy schedule.

LEO: So, what brings you to The Bard’s Town?
Jacob Williams: This will be my first show in Louisville since “America’s Got Talent.” I really wanted to do a hometown show, but sometimes, with schedules being what they are, it takes a long time to set that up. And since I didn’t have anything upcoming booked in the clubs in Louisville, I thought, “I love The Bard’s Town, why not?” And this will be the first time I headline my hometown, so that’s kind of special to me.

LEO: How did you find the comedy scene different when you moved from Louisville to Chicago?
JW: There’s a lot of differences. In Louisville, there is definitely a very strong sense of community among the comics; in Chicago, there’s a community, but there are so many comedians, you have to work harder to make friends. It’s less supportive and more competitive.

LEO: Did you have to prove yourself?
JW: Just coming to town as an unknown name, it was a lot of pressure. But coming back to Louisville this time, headlining, I’m feeling a lot of pressure not to disappoint people.

LEO: So what was the “America’s Got Talent” experience like?
JW: It was a great experience. It’s the craziest thing that’s ever happened to me. It’s very surreal going from being completely unknown nationally to this experience where people are coming up to me at airports and grocery stores and saying they recognize me. It’s a dream come true.

When I auditioned, I didn’t know where the whole thing was going to go, but I certainly didn’t think I would get as far as I did. I went out there, and, the first night, I played to more people on that show than I have in my last five years of comedy combined. That was a very surreal experience. And then, when it’s over, adjusting was weird — figuring out where to go from here and improving as a comedian.

LEO: What doors have opened since that point?
JW: It helped a lot in giving me more credibility, in terms of booking and more gigs. I get to be a full-time comedian now, I don’t have to work second jobs. It’s gotten me a lot closer to the things I’ve been working toward for a long time.

LEO: Have you signed your first autograph yet?
JW: Yeah, I’ve signed a couple of autographs. And people are even requesting them through email and my website, which I’ve never had before, either. And, just this week, I’ve had three marriage proposals via Twitter.

LEO: Were the girls who proposed to you at least hot?
JW: Yes. I have found that all of the new fans following my comedy are very attractive.