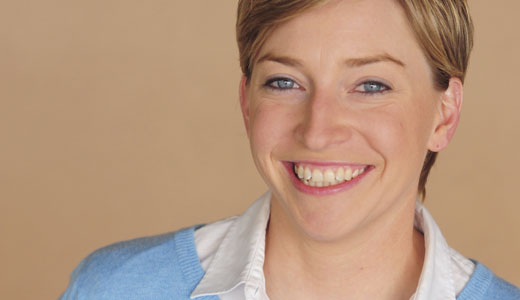 You may know Kristin Key from being a semi-finalist on NBC’s “Last Comic Standing,” but she’s also a woman of the road when it comes to comedy. Constantly crisscrossing the country, she brings a strange sense of humor that’s both quirky and optimistic to comedy clubs all across the United States. She’s a comedy troubadour, complete with acoustic guitar. And she’s going to be “on it like a bonnet” (you’re going to have to ask her what that means) this weekend, when she returns to Comedy Caravan.

LEO: What was your first time doing comedy like?
Kristin Key: I was 19 years old. I did an open mic night in Amarillo, Texas. I had been practicing with a hairbrush in a mirror for about a week. I ended up going on first because some big fat magician guy didn’t want to, and I just wanted it to be over with. But I had a great set, which doesn’t usually happen your first time, it was a fluke. Then, the second time, I bombed worse than I have ever bombed in my entire life.

LEO: Your parents being kind of religious folks, have they come around to you doing comedy?
KK: You know, when it comes to my parents, “kinda religious” doesn’t cover it. Dad being a minister, his father’s a minister, my mother’s a preacher’s wife, and her father was a minister. My entire family are ministers — they’re not just like, “Oh, we go to church” — they are the church.

So they still view me as doing exactly the opposite of what they’re doing, but we’ve bonded on trying to find commonalities. I’ve taken up quilting to bond with my mother, and I’ve gotten really into football to bond with my dad. I’m trying to find the little details in me that they like so we can bond on those, and we won’t have to disagree on the big things. I’ve gotten to be a pretty good quilter, by the way.

LEO: Best advice for a comedian?
KK: Make sure this is what you want to do. If you think you might be good at anything else in the world, go do that. It’s a hard business, it’s not very rewarding — but if you love it, there’s nothing better.

LEO: Got to be willing to live in your car?
KK: It’s all a matter of perspective. I would never say I lived in my car; I used to call it camping. I didn’t have a sleeping bag, but I would go to a campsite, bring a pack of wieners, some beer, and pretend I was camping — not living in my car. It’s all about how you look at it. If you think you’re living in your car, you’ll be miserable. If you think you’re camping, then you’re adventurous and you’re an outdoorswoman. It’s much more exciting.