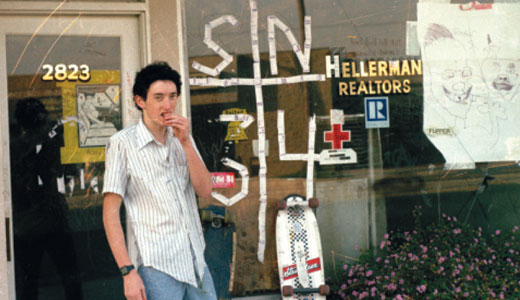 In 1981, David Markey and Jordan Schwartz were teenagers in the right place at the right time. Los Angeles had become ground zero as punk evolved into hardcore, led by Black Flag and dozens of others who, while unknown to the mainstream at the time, would influence two generations of musicians and fans.

The duo began photographing the early Reagan-era scene, taking shots of bands like the Minutemen, the Descendents, Suicidal Tendencies, and Social Distortion. More than 400 of their best fill the book, originally published in their homemade zine “We Got Power!” In 1983, “The Simpsons” creator Matt Groening (then a little-known L.A. Weekly cartoonist) called the zine “Essential reading … the funniest of the local mags.”

All six issues of the zine are reprinted in the book, which also includes essays from others who were there, including Black Flag’s Henry Rollins, Keith Morris of the Circle Jerks, and SST Records’ Chuck Dukowski.

“The culture of fanzines was interesting — how information spread, and how it was interpreted,” Markey says. “There was no other way to get that information out. What you did with it was entirely up to you.”

It’s funny to look back at Reagan now, he says, after the various Bush eras and after Paul Ryan revealed himself to be a Rage Against the Machine fan. “Reagan seems like a warm, fuzzy memory in retrospect. I think Ronald Reagan really made hardcore happen, nationally. It was sort of a call-to-arms, something that everyone could agree on.”

Putting the book together has put Markey, who turns 49 in a couple of weeks, back in the mindset of himself as a 17-year-old, getting into music and learning about the world. “I’m totally filled with gratitude about getting to witness all of that. It really set me up for the future, in a lot of ways,” he laughs. “At the same time, nothing has ever really matched that. I’m not trying to recreate that — or that I only live in that era, at all. But I know that I’ll probably never get to see that kind of scene again.

“I wasn’t looking 30 years into the future back then,” laughs Markey, now a filmmaker who recently directed a Circle Jerks documentary, “My Career as a Jerk.” “I probably didn’t even anticipate there being a future back then.”

In the summer of 1991, he followed Nirvana and their friends around the festival circuit, capturing the band just before they became international stars. His documentary, “1991: The Year Punk Broke,” has become a music-movie classic. “Witnessing their whole massive overnight explosion, that was a trip, too. That came 10 years after, for me, from ’81 to ’91. I got to witness both things happening, and see just how different the outcome was.”

Before Nirvana, before the Internet, underground bands stayed underground. “If you sold 50,000-100,000 records, you were basically the Beatles, or the Rolling Stones, of punk,” Markey notes. The bands seen in “We Got Power!” paved the way for today’s independent bands, sonically and in the way bands on that level are able to tour.

In the early ’80s, zines spread the word about bands too punk for mainstream magazines to have an interest in and helped grow that audience. “Rolling Stone? Forget about it!” he exclaims. “The whole generation that all came out of the ’60s counterculture — by the time the late ’70s and early ’80s came around, that counterculture had totally flipped. That had become the mainstream. It got just as conservative as the Woodstock generation turned into yuppies.”

All that festered for a long decade until Nirvana brought in a new era, followed quickly by Democrat Bill Clinton presiding over a so-called Alternative Nation.

Today, he cites the Russian group Pussy Riot as an heir to punk’s legacy, but asks otherwise, “Where’s the outrage? I don’t think this generation knows where to begin, or even has a clue as to what the hell’s going on.”

Perhaps forgetting about the Arab Spring, he continues, “I think now people are just really self-involved, and there’s no looking out. Everyone’s in front of a touch-screen. There’s this great tool that we have with the Internet — it should be an age of enlightenment. But you realize, there’s never been more corporate control.”