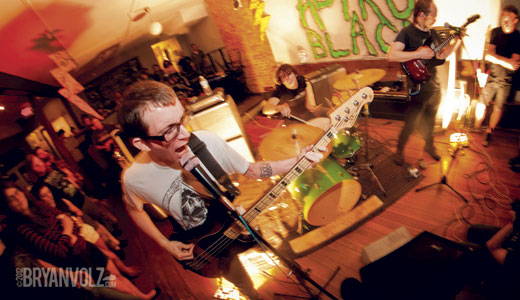 Anwar El Sadat was born in 1918 and served as the president of Egypt between 1970 and 1981. He won a Nobel Peace Prize for his role in achieving the Egypt-Israel Peace Treaty, an act that led to his assassination.

Punk rock was developed in the United States, England and Australia in the mid-1970s. Led by notable acts such as the Ramones and the Clash, it is an oft-political form of music created in reaction to mainstream conventions.

The band Anwar Sadat is currently one of the most viscerally thrilling bands in Louisville. After touring last month, they will open for Wax Fang at Headliners on Nov. 17.

LEO: What do you tell older relatives your band sounds like?

Shane Wesley: “Punk.” They know what that is, at least. I don’t think any of our relatives are too far removed from popular culture.

LEO: How did the Egypt-Israel Peace Treaty influence your decision to form a band?

SW: It didn’t. We seriously just looked at the name, imagined it on a T-shirt, and decided that this was it.

LEO: If cassettes become “cool” again to folks like Pearl Jam and Urban Outfitters, would you still want to release cassettes?

SW: I don’t think whether something is “cool” or not factored into the decision of releasing a cassette. It’s mostly just really cheap to produce, and we needed something to sell on tour since we sold out of 7”s.

LEO: How do you feel about Wax Fang?

SW: Cool dudes who are very good at what they do.

LEO: If death is no vacation, then what is it?

Listen to the music at anwarsadat.bandcamp.com.